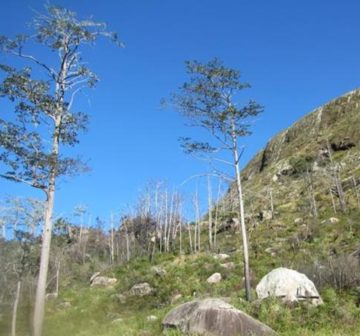 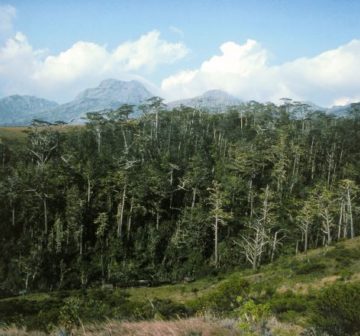 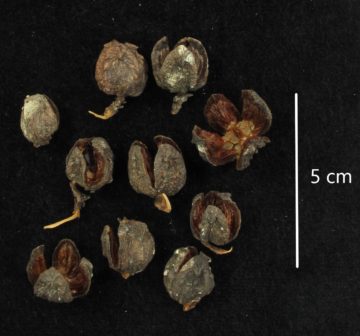 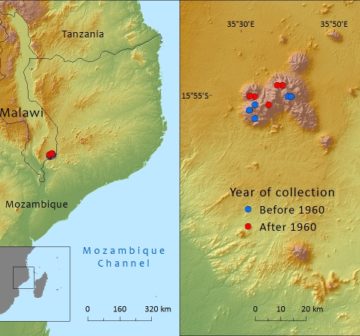 The Mulanje cedar is endemic to Mt. Mulanje in Malawi. The extent of occurence is estimated to be less than 600km² with an actual area of occupancy estimated to be 845 ha. It is know from a single location (sensu IUCN)

A recent survey (Makungwa, 2004) has concluded that only 845 ha of ‘Cedar forest’ is left on Mt. Mulanje.Within this area almost 33% of the trees were dead. Given the current rate of illegal logging, combined with a range of other threatening processes, the overall decline is likely to exceed 80% by 2030.

Widdringtonia whytei is an important to co-dominant species in the Afromontane forest on Mt. Mulanje, which also includes Podocarpus milanjianus, Cassipourea malosana, Ekebergia capensis, Olea capensis, Polyscias fulva, Rapanea melanophloeos and Xymalos monospora, and in the more fire-prone ecotone (with ericaceous scrub) to grassland, the closely related species Widdringtonia nodiflora. It is a successional species after fire ("periodic fire climax"), but unlike its congener, it does not coppice from (fire-caused) stumps and has to regenerate from seed (Pauw & Linder, 1997). Thickets of Erica benguelensis which develop after fire offer protection for cedar seedlings, leading to W. whytei becoming the dominant tree until invading angiosperms succeed; however these have been prevented from doing so by the next fire at a cycle of 100-200 years. Mt. Mulanje is a granitic batholith rising through surrounding older sediments. The soils are therefore largely rocky, acidic and shallow except in colluvial pockets in gorges and valleys. The altitudinal range is 1830–2550m above sea-level. The climate is cool tropical montane, with abundant precipitation, much of it as fog.

The wood of this species is highly valued for construction and building of houses as it is the only sizable tree in the family Cupressaceae that occurs naturally in a large surrounding region. Its wood, as of other members of the family, is decay and insect resistant. Large timber yielding trees are becoming increasingly rare due to overexploitation of this valuable resource for more than a century (Chapman, 1995). Attempts at plantation forestry using this species have been made, but have been much less sucessful than the plantations of the exotic species Cupressus lusitanica and Pinus patula which grow faster. It also appears that most of these plantations involve a mixture of two species (Pauw & Linder, 1997), often with W. whytei at a disadvantage as it grows slower. The wood of W. whytei is yellowish brown and of excellent quality for construction, general carpentry and joinery, wood panelling, flooring, and furniture making. In colonial times some of its wood found its way to English interiors, nowadays there is no export of this timber. This species does not appear to be in horticultural use, although it is present in a few botanic gardens in South Africa

Widdringtonia whytei has been heavily exploited for more than 100 years. Its current actual area of occupancy is estimated to be about 845 ha. Continued illegal logging, combined with an increased frequency of fires, a lack of regeneration, the impact of invasive species, exotic pests  and over collection of firewood is likely to produce a decline of more than 80% by 2030. As a result it is assessed as Critically Endangered under the criteria for A4 and B2.

This species is acutely threatened with extinction for a range of reasons. Its area of occupancy and the number of individuals has been severely reduced through excessive felling in the past 100 or more years. Currently, only dead standing timber is legally harvested but illegal cutting of living trees is a major problem. An increase in the extent and frequency of fires further reduces remaining stands and prevents regeneration. Although some fires are natural, the majority are the result of deliberately set hunting fires, crop burning and, to a lesser extent, forestry and tourism activities. Fuelwood collection and the expansion of small holder farms into the lower slopes is a more indirect, but widespread threat as it leads to deforestation and degradation of forests at lower altitudes. As these lower forests disappear, pressure increases on the higher altitude forests including the remaining cedar stands. One recent study (Hecht 2008) indicated that, if current trends continue, the lower slopes could be completely deforested within the next decade, with the upper forest following soon after. Forestry plantations have been established in many parts of the plateau: Pinus patula has since become the dominant species in some areas. Introduced pests such as the Giant Cypress Aphid (Cinara cupressivora), originally associated with the exotic forestry species Cupressus macrocarpa caused significant losses in the 1980s and 1990s. Despite the introduction of biological controls, it is still a significant problem. A potential threat in the near future relates to open cast mining of the significant bauxite deposits that have been found on several parts of the plateau.

Mt Mulanje was declared as a Forest Reserve in 1927, partly to regulate the exploitation of the cedar forests but also to protect the watersheds. Currently all logging of live cedars is illegal and the collection of dead timber is regulated by licenses issued by the Forestry Department. Enforcement of these regulations is problematic. Fire breaks have been established in many parts of the reserve but maintenance, along with  and monitoring and fire fighting are limited. Small nurseries have been established to produce material for restoration programmes - a limited amount of replanting has taken place but it is too early to judge their success. A range of schemes have been initiated to try and reduce the demand for fuelwood from people in the surrounding areas: a recent review indicated these programmes were too limited in their benefits and that fuelwood demand was likely to increase (Hecht, 2008). Biological controls have been introduced to combat aphid infestation. Programmes for invasive weed control are urgently required.