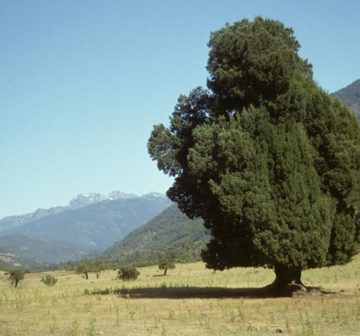 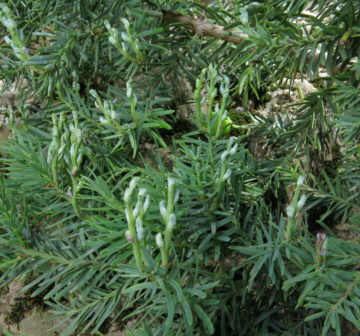 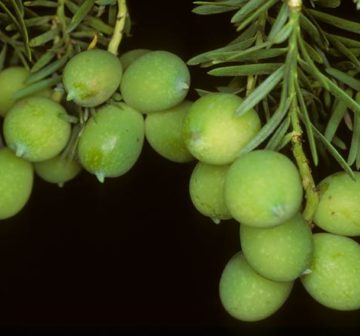 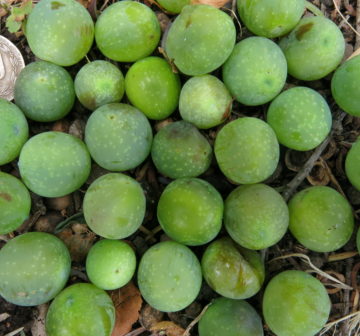 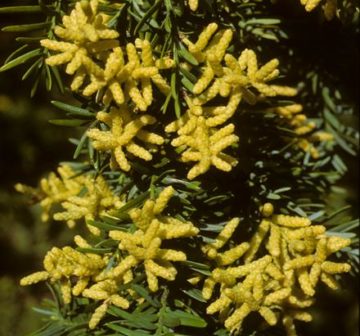 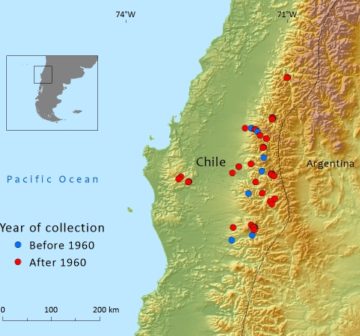 Male-cones in spikes, each subtended by a linear-lanceolate bract.; female-cones a plum-like fruit, 2-3cm long, yellow when ripe, sweet-tasting; flowers in november. Seed ovoid; fruits mature from january to march.

Prior to 1998, standard references for the flora of Chile considered P. andina to be endemic to Chile (Rodríguez 1983,{ref11} Marticorena & Rodríguez, 1995).{ref7}Covas, (1998){ref2} cited P. andina as having an Argentinean distribution based on a herbarium specimen collected in 1936 by Cabrera (no. 3675) apparently from near the Río Aluminé in Prov. Neuquén. However, recently this specimen has been re–examined at the La Plata Herbarium, Argentina, only to find that the location label details relate to Ñuble, Recinto, which is located in Chile. Tortorelli (1956){ref13} lists P. andina as occurring in Cañadón Regolil (Prov. Neuquén), Argentina, which is very close to the Chilean border. Local botanists and foresters have not been able to confirm the occurrence P. andina at this location, saying that the conifer Saxegothaea conspicua, which is not uncommon in the area, is often mistaken for P. andina.

In the Chilean Andes it is restricted to the bottom of valleys close to large rivers where it is often associated with Austrocedrus chilensis, Cryptocarya alba, Quillaja saponaria and other trees and shrubs which form part of the sclerophyllous vegetation. In the Coastal Cordillera it is associated with a remnant forest that was once dominated by Nothofagus dombeyi and N. nervosa (Hechenleitner et al. 2005).{ref6} It is a dioecous species and the embryos at 'fruit–fall' are immature and need a period of after-development which may take up to four years (Gosling et al. 2005).{ref5}

Although the wood is of value and was traditionally been used for house building, there is little evidence that the wood is widely used today.

The following assessment for Prumnopitys andina is based on the results of extensive field work carried out between 2001–2004 and published in Hechenleitner et al. 2005.{ref6}

Prumnopitys andina is threatened by a lack of regeneration in a number of subpopulations due to livestock eating the fleshy cones; this is further exacerbated by the delayed germination of this species at 'fruit-fall'. Grazing of seedlings and small plants is also a problem. In the Alto Biobío one subpopulation has been severely reduced by the damming of the Río Biobío for a hydroelectric scheme. Afforestation with exotic pines in the only location in the Coastal Cordillera has in the last 15 years reduced the subpopulation by 50% to an area of less than 500m² (Hechenleitner et al. 2005:{ref6}) this subpopulation is also suffering from livestock grazing. Volcanic activity and lava flows in Parque National Conguillo has fragmented the subpopulation: Volcan Llaima remains one of Chile's most active volcanoes.

Prumnopitys andina occurs in only three protected areas (Parque Nacional Conguillío, P. N. Tolhuaca and Reserva Nacional Ňuble) which represents a small proportion of the total population. Recent molecular research (Martínez unpubl. data 2010) concluded that while there are low levels of differentiation between the subpopulations, significant levels of genetic diversity are found in the most northerly subpopulations in the Maule valley. This potentially important genetic refuge for this species suggests it has in the past experienced some degree of isolation. The International Conifer Conservation Programme (ICCP) has collected seed from most subpopulations and established an ex-situ network of sites in Britain and Ireland (including conservation hedges) comprising ca 600 genotypes.