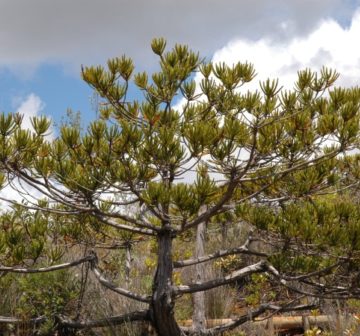 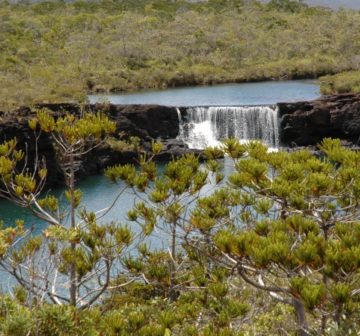 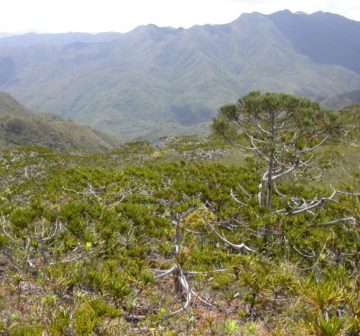 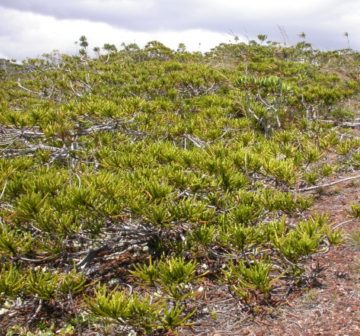 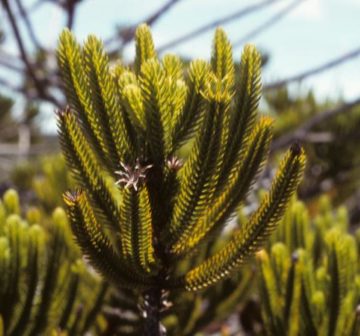 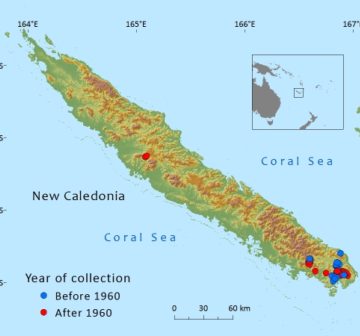 Borne in tufts of 20–30, crowded at the terminal 10–15cm of branches, rising or erect, sparsely branched or unbranched, 20 x 0.5–1.0cm, densely covered with overlapping leaves. Leaves arranged in alternate whorls of 4, 6–15 x 1.8–2.5mm, apex acute-pungent, stomata in bands above, in scattered rows below.

Endemic to New Caledonia where it is confined to a few locations in the south of the main island of Grande Terre and a recently discovered very small disjunct subpopulation 180km further north, on the summit of Mt Paéoua in Province Nord. In its main area of distribution in the south there are only three main stands: Montagne des Sources (122ha), Madeleine/Plaine des Lacs (21ha) and Yaté Sud (0.5ha) (Cherrier, 1980; Woltz & Cherrier, 1984). The subpopulations vary from just a few individuals to large stands (e.g. Montagne des Sources); in its most northernly location on Mt Paéoua there are only 45 mature individuals recorded.

Only found in maquis shrublands on ultramafic substrates. It has an altitudinal range of between 30 to 1140m.

There has been an estimated population size reduction of more than 50% over the last three generations resulting in a decline in the area of occupancy and quality of habitat. This is based on levels of past exploitation, the extent of inundation in the 1960s and a comparison of historic and recent herbarium records. The current extent of occurrence (EOO) is estimated to be 1,597km². The current area of occupancy is estimated to be 32km² with only three locations (Paéoua, Montagne des Sources, Plaine des Lacs/Chute de Madelaine). The main subpopulations are severely fragmented in terms of their geographic and ecological isolation. A continuing decline in the area of occupancy and quality of habitat is also projected due to the increasing frequency of fires and the effects of mining. There would be a very significant reduction in the extent of occurrence if the subpopulation at Paéoua were to be eliminated (without it, the EOO would be about 200km²).

Increasing fire frequency is currently the main threat throughout its range. The subpopulation on Mt. Paéoua is very threatened by mining activities. In the past this species was exploited for its resin and wood. Several subpopulations have also been threatened by the creation of reservoirs behind the Yaté dam in the 1960s.

Several of the southern subpopulations occur in protected areas although these are still vulnerable to repeated burning. Restoration work has been initiated at the Chute de Madelaine reserve.