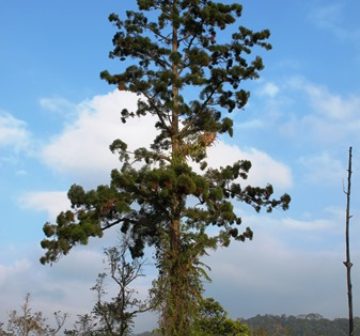 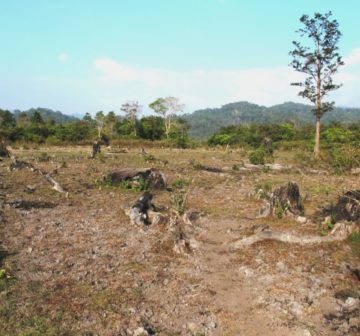 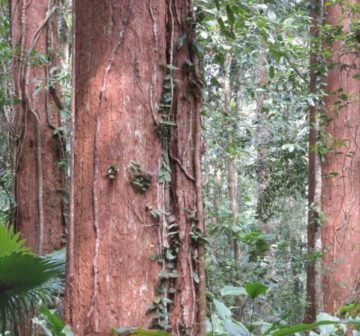 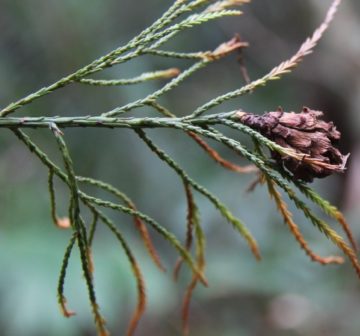 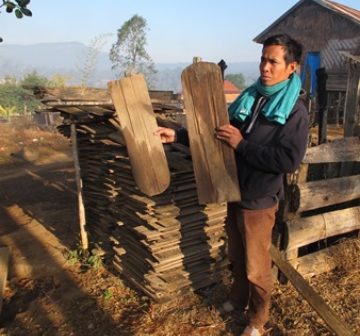 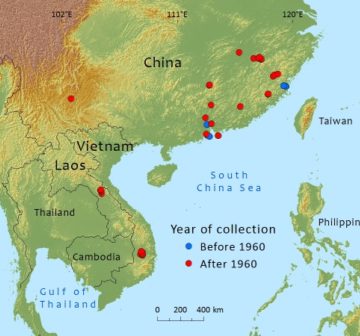 Genuinely wild populations of Glyptostrobus are currently only known for certain from Việt Nam and Lao PDR. It is widely distributed in China but it is very uncertain if any of these occurrences represent wild popualtions as opposed to cultivated or naturalised populations.

In Việt Nam it is restricted to nine small localities in Đắc Lắc Province (Averyanov et al., 2009). The total number of mature trees is less than 300 and these are mainly concentrated in to two small reserves at Trap So and Earal.

In Lao PDR Glyptostrobus was first reported in the early 1990s by Vietnamese foresters involved in logging on the Nakai Plateau prior to the construction of the Nam Theun Hydroelectric Scheme. The first stand of 200–300 trees were documented in 2006 by a team of ecologists surveying potential wetland sites. Since then several smaller stands with 10–40 trees have been located on the plateau (Thomas & LePage, 2011).

In China, Glyptostrobus is widely cultivated, especially in the southeastern provinces where it is commonly grown along paddies and watercourses. Historical records indicate that it was certainly indigenous to this area but centuries of cultivation combined with conversion of its habitat for agriculture make it likely that no genuinely wild populations exist (Li & Xia, 2004; 2005).

In both Việt Nam and Lao PDR, Glyptostrobus is restricted to seasonally inundated areas in evergreen forests along small watercourses and around swamp margins on mid-elevation (500–700 metres above sea level) plateaus. In China it was predominantly a lowland species found on river floodplains and in deltas.

The timber from this species has been utilised in a variety of ways includng as roof shingles, boats, bridges and even bouyancy floats. In China Glyptostrobus has a strong Feng-shui association and saplings were often presented as gifts to people building new houses.

The IUCN assessment is based on the known wild populations in Lao PDR and Việt Nam. The total number of mature trees remaining in the wild in Lao PDR and Việt Nam is estimated to be less than 500. However, very few of these trees (certainly less than the threshold for Critically Endangered) produce seed and regeneration is absent, at least in the reserves in Việt Nam. An ongoing decline is expected due to habitat fragmentation and degradation.

In Việt Nam the stands are located within an intensively cultivated coffee and pepper production area. Stands are prone to fires and variations in the water level. Some illegal logging occurs and extraction of stumps of recently killed trees has also been reported.  In Lao PDR the first stand to be documented was inundated by the reservoir for the Nam Theun Hydroelectic Scheme. The largest trees in this stand had already been logged in the 1990s. Other stands are either located in swamps that have been drained or altered in other ways or are in areas that have been allocated for food production for nearby villages.

In Việt Nam the majority of trees are within officially protected areas. However as these reserves are very small they are very susceptible to fires (deliberate and natural) and to changes to waterlevels due to agricultural activities. No viable seed has been produced for more than 20 years so that vegetative propagation is necessary for any restoration or ex-situ work. Propagation protocols have been established but financing for an ongoing programme of propagation and reintroduction has not been secured.

In Lao PDR surveys for additional stands on the Nakai Plateau are urgently required. Locally based conservation management plans are need to ensure local participation in protecting the stands that are near villages. In China surveys of  any areas with suitable habitat that may contain natural populations are required.