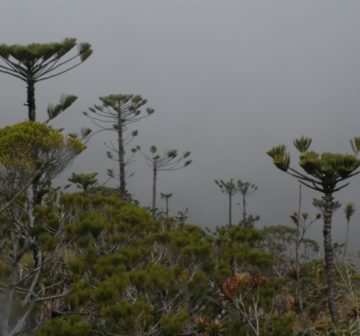 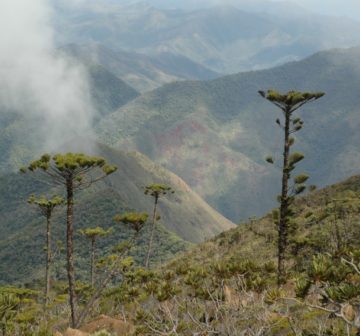 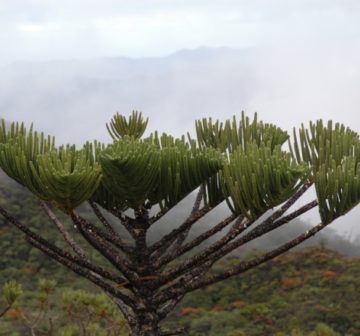 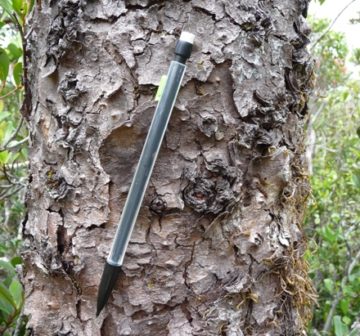 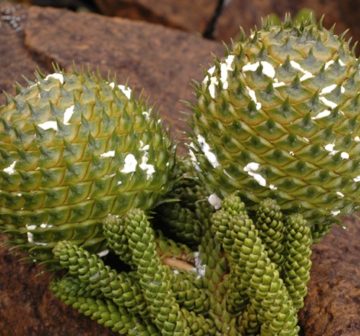 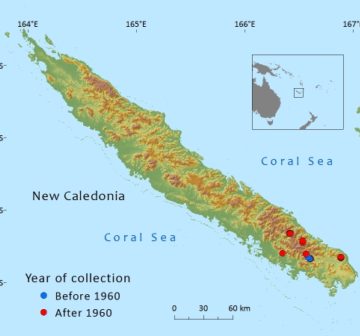 A monoecious tree varying from 6–20m tall, with a diameter up to 70cm at maturity. Mature trees have an open, candelabriform crown with an overall columnar shape and with branches along most of the length of the trunk. The thick outer bark varies from grey to brown, often tinged with yellow or green. It peels horizontally in small, curled strips.

The adult leaves are short and broadly ovate, 3.8–6.5 × 1.5–2.5(–3)mm, densely imbricate, with a blunt rounded apex. The stomata on the outer surface (abaxial) of the adult leaves are restricted to the base and the apex (x10 lens needed).

Endemic to New Caledonia in the southern part of the main island of Grande Terre. Here it is concentrated on the highest peaks of the southern massifs especially Mont Humboldt, Mont Kouakoué and Montagne des Sources. There is also an atypical subpopulation in the Mamie area at relatively low altitudes (540-600m).

This species occurs either in montane dense humid forest or tall maquis (2–8m), on ultramafic soils derived from serpentine or peridotite. All populations except the recently identified one at Mamie are restricted to the ridges and summits of the highest mountains of the ‘Grand Massif du Sud’ at altitudes ranging from (540)750–1,600m above sea level. In these areas it forms large populations, especially on E and SE slopes and in gullies. It is sometimes associated with A. rulei (Mt Humboldt), A. laubenfelsii (Mt Mou) or A. muelleri (Montagne des Sources) as well as other conifers such as Callitris neocaledonica, Falcatifolium taxoides, Libocedrus austrocaledonica Prumnopitys ferruginoides, Podocarpus gnidiodes and a diverse range of angiosperm trees and shrubs, e.g. Metrosideros sp. (Myrtaceae), Araliaceae, Dilleniaceae and Lauraceae. Tree ferns (Dicksonia deplanchei) and small palms are also often present, while ferns and sedges form a herbaceous layer. Lichens and mosses are very abundant above 1,200m (Manauté 2003).

Prior to 2002 this species was considered to be Lower Risk/Conservation Dependent even though the distribution is geographically limited, however, the major subpopulations are in remote, difficult to access parts of protected areas. There was no apparent threat or evidence of any significant decline. Visits between 2002 and 2005 to the main subpopulations found that the forests at Montagne des Sources appeared to be healthy with good regeneration, however, with the main stands of Mt Humboldt and Mont Kouakoué there was evidence of a major decline with large numbers of dead and dying trees over large areas. The cause of the decline is currently unknown; there is no evidence of recent fire and the understory species (other conifers included) appears not to be effected in either location. There needs to be continuous monitoring of the main stands in order to assess whether the decline is continuing or if there is some degree of recovery.

The total extent of occurrence is estimated to be between 100 and 150km² with fewer than five locations. There is recent evidence of a decline in the area, extent and quality of habitat; main threats include fire, dieback (cause currently unknown)

The majority of stands are in remote parts of protected areas such as Montagne des Sources and Mont Kouakoué.