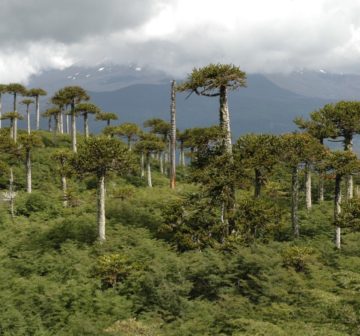 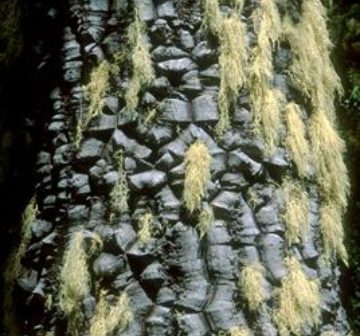 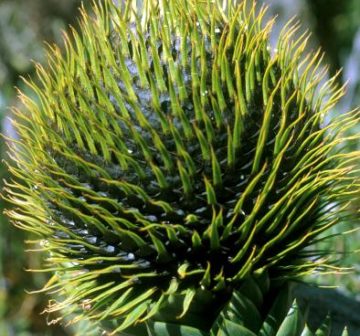 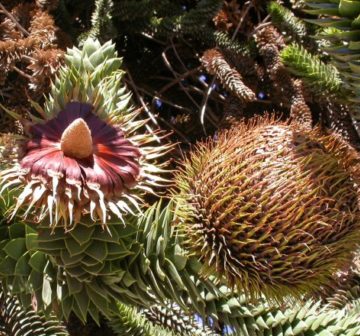 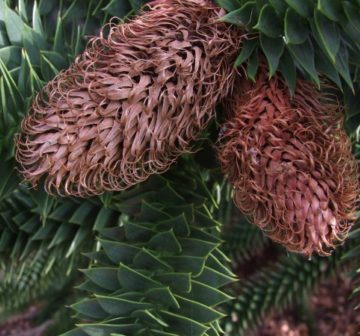 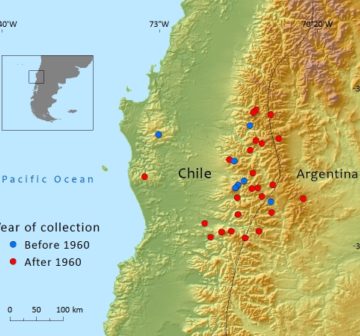 Native to south-central Chile and southwestern Argentina where it has a relatively limited distribution spanning three degrees of latitude from 37º20' to 40º20'S (Veblen et al. 1995). Its distribution is split between the main area straddling both sides of the Andes and two other disjunct small sub-populations in Cordillera de Nahuelbuta in Chile. The total area of occupancy in Argentina and Chile is 392.51km².

The main subpopulation is confined to the Andes, with most of the stands on the western slopes in Chile. In Argentina they are confined to a narrow strip about 200km in length; the most important forests are 30 to 50km wide and 150km long. The eastern-most stands occur as isolated groups (Burns 1993) which are probably remnants of an earlier, wider distribution. These fragmented stands show high levels of genetic variation (Bekessy et al., 2002, Marchelli et al., 2010) and these rear edge sub-populations are considered to be 'disproportionally important for the long-term conservation of genetic diversity' (Hampe & Petit 2005). The coastal cordillera of Chile has two small sub-populations, one mostly confined by Parque Nacional Nahuelbuta and the smaller southern, unprotected site of Villa Las Araucarias. This latter sub-population is also significantly genetically differentiated (Bekessey et al. 2002).

In the Andes Araucaria occurs from the upper timber-line at ca. 1500 to 1800m, down to 900m with scattered individuals as low as 600m (Veblen 1995). The forests occur on soils derived from volcanic ash deposits (Casertano & Lombardi 1963) or on well-developed soils derived from metamorphic and sedimentary rocks (Peralta 1980). It can form relatively extensive pure stands often on steep volcanic slopes or in association with temperate rainforest species including Nothofagus antarctica, N. dombeyi, N. pumilio and Saxegothaea conspicua (Hechenleitner et al. 2005), however its most common forest type in the Andes is over a sub-canopy of Nothofagus pumilio (Veblen 1982). In the northern sub-population in the Nahuelbuta Cordillera (southern central Chile) the species occurs at its highest coastal altitude of 1400m and grows with N. obliqua and N. pumilio while the southern sub-population occurs at an altitude of 600m in a highly disturbed landscape dominated by mixed forests of Nothofagus spp. and exotic tree species (Hechenleitner et al. 2005). In Argentina it forms pure stands at between 900 and 1800m (Rechene 2000), but it is commonly associated with Nothofagus antarctica or N. pumilio (Funes, 2006), in Parque Nacional  Lanin 49% of the forest is associated with Nothofagus pumilio and N. dombeyi. Towards the east of its range in Argentina where the rainfall is less (between 1000 to 1500mm) it occurs with Austrocedrus chilensis, Lomatia hirsuta and shrubby species of the steppe vegetation (Burns 1993).

Its ecology is disturbance-driven, mainly by the effect of volcanoes, fire, landslides, snow avalanches and wind. In order to survive such disturbances it has developed effective adaptations, such as thick bark and epicormic buds (Burns 1993; Veblen 1982). Araucaria araucana is predominantly dioecious and its seed is gravity-dispersed or assisted by Austral parakeets (Enicognathus ferrugineus) and other animals (Shepherd et al. 2008). Both seed and pollen are relatively heavy and may not disperse over large distances, although seed dispersal may be assisted by parakeets and other animals (Finckh & Paulsch 1995). Asexual reproduction by root suckering has been reported (Schilling & Donoso 1976), but it is unknown how important this process is to population maintenance and expansion (Veblen et al. 1995). It is a long-lived tree and specimens over 1300 years are not uncommon.

Araucaria araucana has light, soft, medium-weight wood which is used for lumber, flooring, paper pulp and ship-masts (Delmastro & Donoso 1983). Due to its listing on Appendix I of CITES there is no legal international trade in the timber; currently there is only local use in Argentina and Chile. The seeds are very rich in carbohydrates and proteins and were once an essential part of the diet of the indigenous people; the seeds are boiled or roasted, and their taste is similar to that of chestnuts. Today, the seeds are still eaten by local inhabitants, both the indigenous people and settlers. It is also highly prized as an ornamental tree in Europe (especially throughout Great Britain) and in parts of North America.

Araucaria araucana has an actual AOO of 392.51km² which falls within the threshold of 500km²  for Endangered under B2. Within the Andes and the Coastal Cordillera of Chile it is severely fragmented and there is a continuing decline in its AOO and EOO due to a range of debilitating factors including fire, logging and overgrazing.

About 60% of the Argentine Araucaria forests remain after deforestation (Veblen et al., 1999; Rechene 2000) and these forests are under continual threat and degredation, historically this has been caused by fire, logging and overgrazing. The frequency of fires has increased during the 20th century in order to establish agricultural and livestock activities (Marchelli 2010) and this has resulted in severe fragmentation of Araucaria forests.  Today the most obvious sign of forest degradation is the lack of natural regeneration that, under normal conditions, follows a ‘pulse’ pattern of highly productive seed years followed by less productive ones (Gallo, 2004). Many forests are subject to intensive human use in the form of seed collecting and animal grazing, Araucaria trees are poor at regenerating, and any regeneration that does occur is principally asexual with trees sprouting from roots (Gallo 2004). There are severe threats in the north of its range in Argentina, due to the establishment of plantations of exotic tree species within those stands (A.C. Premoli pers. com.).

Araucaria araucana is listed on Appendix I of CITES which strictly regulates the trade in its timber and seeds. The listing was approved in Chile in 1979 and it transferred from Appendix II to Appendix I in Argentina in 2000 (Anon, 2000). It is listed as a Natural Monument in Chile which gives it legal protection against logging. Approximately, 65.9% of the forests in the Coastal Range are within private properties, and the State (SNASPE) protects only 34.1% (Echeverría, 2004). The subpopulation in Villas Las Araucarias, which has unique genetic characteristics, is currently unprotected by the State (Bekessy et al. 2002, Echeverría et al. 2004 ). There are several Chilean private initiatives which are helping to protect Araucaria forests and these include Parques Para Chile and Reserva Nasampulli. In Argentina most stands have some form of protection, especially in Parque Nacional Lanín and Nahuel-Huapi. However, small and fragmented stands towards the eastern range in Argentina which are as genetically diverse as those on the Andes, occur outside protected areas and deserve particular attention (Marchelli et al. 2009).  The Chile Villa Las Araucarias forest restoration project is restoring a severely degraded 4 hectare site (Echeverría et al. 2004).