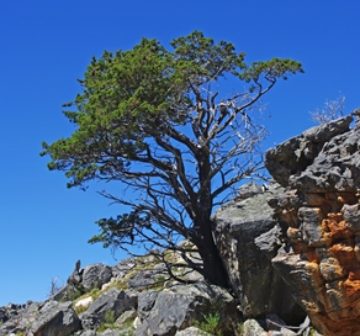 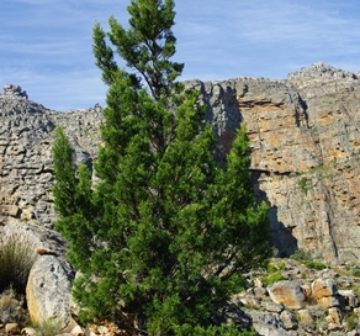 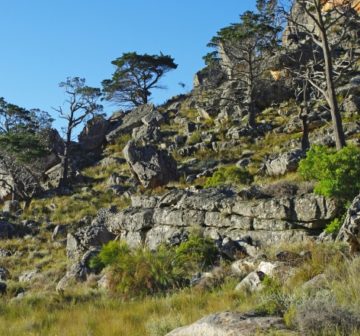 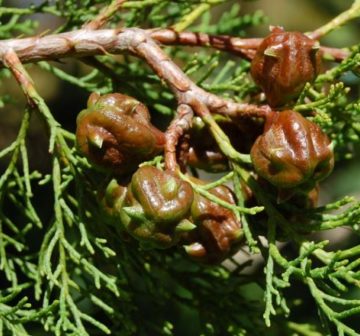 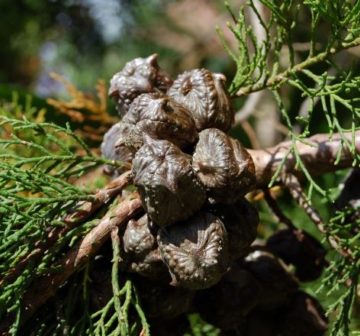 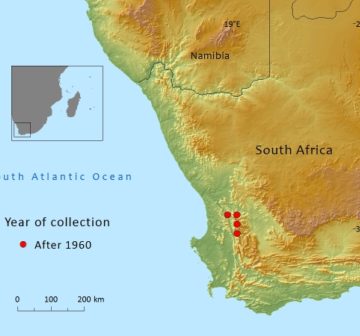 Endemic to South Africa: Western Cape Province, Clanwilliam District, Cedarberg Mountains. Higgins et al., (2002) produced a fine scale model of suitable habitat for this species. The modeled range was ground-truthed through field surveys, and based on these surveys the extent of occurrence (EOO)  was calculated to be 660km². The survey also revealed that only 6% of suitable habitat is occupied by the species with an actual area of occupancy (AOO) estimated to be 39.6km². While there are several localities, the number of locations (sensu IUCN) is difficult to determine as the severity and extent of fires (the main threat) can vary depending on their origin or cause.

Historical reports indicate that the species was formerly abundant within the Cederberg Mountains, and that the first and most severe population decline occurred after European colonizers settled in the area in the late 18th century. The vegetation of the Cederberg is very poor in tree species, and the Clanwilliam Cedar was heavily exploited for timber. In 1879 alone more than 7000 trees were cut down for use as telephone poles (Andrag, 1977). This overexploitation caused a significant population reduction, which is corroborated by the pollen record (Meadows & Sugden, 1991). By 1883 no accessible trees of commercial value remained (Mustart, 2008). Although it is not possible to quantify exactly the population reduction as a result of timber harvesting, it is suspected that harvesting caused an 80–90% reduction in the population.

Although timber harvesting has ceased, the population has never recovered: it would be impossible to find even a hundred telephone pole-sized trees in the Cederberg today (Mustart 2008). Attempts to increase the population through seeding and introduction of ex situ grown plants have been largely unsuccessful. A synthesis of long-term monitoring data of trees in four permanent plots records a 94% population decline between 1977 and 2003 (Fox, 2003). This decline has been attributed to too frequent and intense fires.

Remnant populations of this species are restricted to rocky ridges and cliffs ('krantzes' or 'kranse') of Table Mountain Sandstone, avoiding other formations below and above it. The altitudinal range is (915–)1000–1500(–1650)m above sea-level. The trees are often protected by large boulders from frequent brush fires in the surrounding (secondary) fynbos vegetation. The annual rainfall is between 500–1000mm and occurs mostly in the cold winter months, while summers are dry and hot.

Clanwillian cedar has been extensively logged for its dense, easily workable and durable timber by European settlers. It was used for fence posts, construction of farm houses and sheds and later for carpentry, furniture, and cabinet making, until the resource dwindled and the last stands were almost destroyed by fires. In the nearby town of Clanwilliam beautifully worked examples can be seen in the Anglican church (doors, pews, carved altar) and Courthouse.

Intensive exploitation in the past, accompanied by changes in intensity and frequency of fires, has resulted in an estimated and observed decline in area of occupancy and quality of habitat of more than 80%. The causes of this decline, while understood, are not reversible and have not ceased. Consequently, Widdringtonia cedarbergensis is assessed as Critically Endangered under the criteria for A2.

Historical exploitation for its valuable timber during the 19th centry led to a reduction of up to 95%. One consequence of this was the expansion of fynbos, a highly flammable vegetation formation. More frequent and more intense fires prevent regeneration; surviving trees are restricted to rocky ridges, ledges, and outcrops mostly beyond reach of the flames. Natural regeneration is also hampered as a result of granivory and herbivory by native rodents.

Today the few remaining trees are protected from cutting for any purposes. Cultivation is now undertaken primarily with a view of population restoration and the species is consequently grown in local nurseries as well as in several botanic gardens. Attempts at replanting are continually being made with low rates of success (Mustart et al., 1995) and extensive ex situ conservation efforts are underway in South Africa, backed by smaller scale plantings elsewhere.