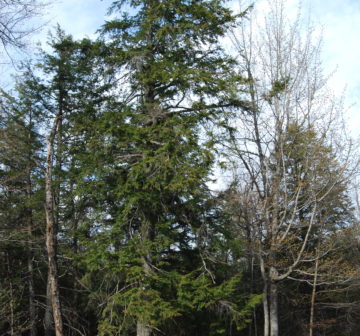 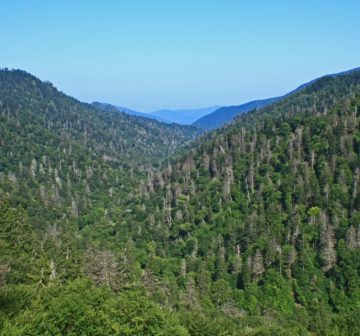 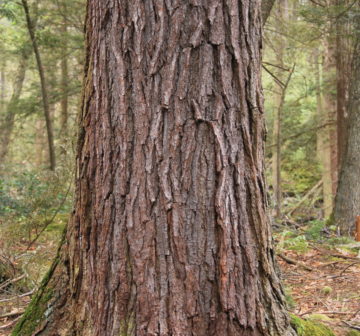 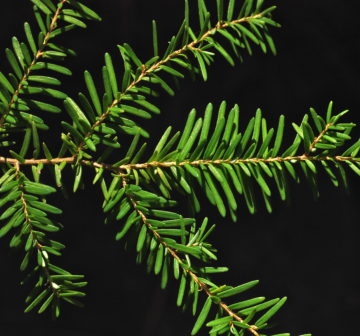 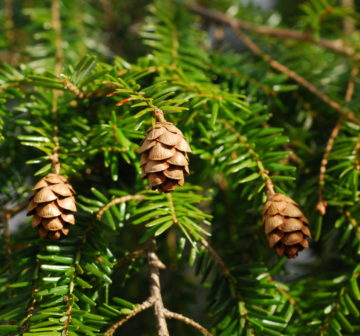 Recorded from eastern North America: occurs from Nova Scotia to northern Georgia, westwards to Minnesota. The extent of occurrence and area of occupancy are well in excess of the thresholds for any threatened categories.

The slow growing Eastern Hemlock produces lumber of good quality suitable for building (e.g. roofs, floors) and making crates or boxes, but until recently these kinds of use were completely overshadowed by its use in the paper pulp industry. Other former uses were to make telegraph poles and railway sleepers. In the past its bark was used in the tanning industry. Eastern Hemlock is still in demand as an ornamental tree; it was introduced to Europe in 1736. In gardens and parks it often grows several trunks, but this is by no means a characteristic of the species in its natural habitat. A large number of cultivars has been produced, including variegated foliage plants and dwarf forms raised from cuttings, whereby the slow growth of this species is an obvious advantage over Western Hemlock, of which few cultivars exist. Conversely, due to that slower growth Eastern Hemlock is less preferred as a forestry plantation tree, giving way to Western Hemlock.

This very widespread and abundant species occurs in many forests and woods. In parts of its range, mainly the southwest, dieback that is caused by an invasive alien insect pest is spreading. This causes the flagging of this species as Near Threatened (close to qualifying under criterion A4ae). Whether this pest is moving the species closer to extinction in the near future is uncertain as there is past (prehistoric) evidence of great fluctuations of Tsuga canadensis that were possibly caused by pest outbreaks, from which it recovered.

An introduced insect pest, the Hemlock Woolly Adelgid (Adelges tsugae) is causing substantial dieback in many areas, expanding from Virginia where it was apparently introduced in 1951 to the north and east. It has not yet reached the main area of occupancy around the Great Lakes. Moderating temperatures associated with climate change could allow the spread of this pest into areas where it has so far been prevented from infesting due to low winter temperatures.

This species is present in many protected areas. Control of the insect pest Adelges tsugae is the main priority and is being researched. Pest control in wild populations is difficult because of negative environmental effects of spraying from airplanes with insecticides.