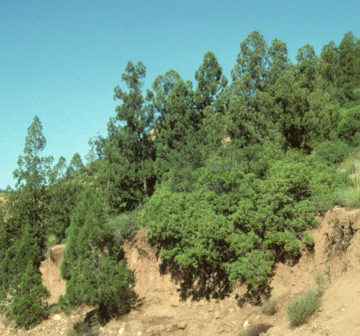 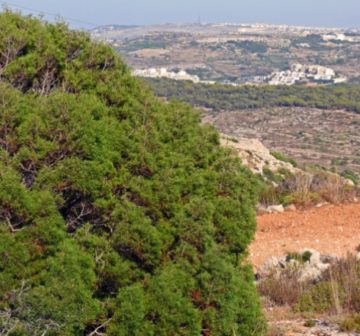 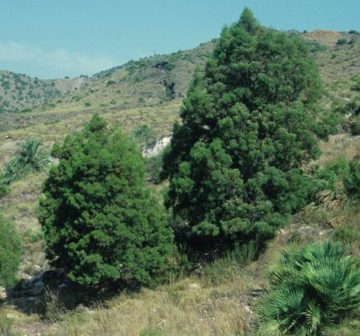 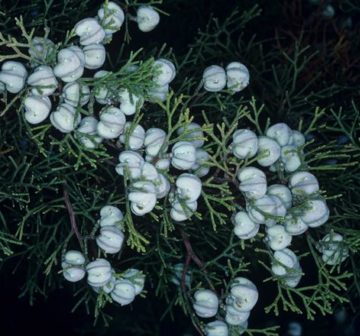 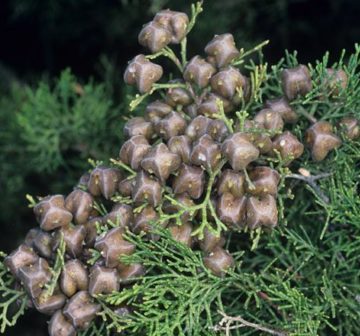 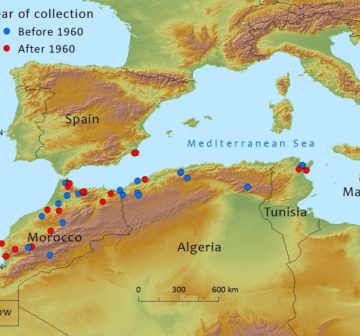 Shrub or small monecious tree 6–15m tall, evergreen, with a pyramidal habit in immature plants, irregular when older; trunk often multistemmed and coppicing from base. Bark with small, thick, angular scaly plates or exfoliating in longitudinal flakes; greyish–brown weathering dark or ash–grey, cinnamon beneath when exposed.

Tetraclinis articulata has a Mediterranean distribution with its main locations in North Africa where Tetraclinis woodlands are estimated to cover almost 1 million hectares. The global distribution is as follows:

Malta: occurs in four locations with less than 130 mature trees: (i) the Mellieha area at:  Wied il-Mizieb also referred to as Ta’ Pennellu (100 trees), Gnien Ingraw (less than 10) and Ras il-Griebeg (2 trees) ; (ii) il-Maqluba (one small tree); (iii) Central–eastern part of Malta, in the Mosta area at Wied il–Gasel (2–3 trees) and San Guzepp tat–Targa (one old tree); (iv) at Ic–Cagak (limits of Mgarr, NW Malta). There are conflicting views on nativity of Tetraclinis in some of its sites. Reliably published details on wild populations for Malta are either very old (Abela, 1647; Borg, 1927), or only published in Maltese (e.g. Stevens & Baldacchino, 2000). Reliable scientific literature in English  is very scarce. Further confusion has been caused because in the past Tetraclinis has previously been mistaken for the non-native Juniperus  phoenicea. Unfortunately Juniperus phoenicea bears the same Maltese name as Tetraclinis–għargħar (pronounced arar), which has complicated matters further. Tetraclinis, which was declared the Maltese National Tree in 1992.

Spain:  Region of Murcia on either side of the city of Cartagena in three distinct locations. These are west of the city of Cartagena at Monte Roldan and Algameca with two east of Cartegena which consist of the following named sites: Escombreras, Fausilla, Cola del Caballo, Cabezo de la Galera, Cenizas-Peña de Aguila, Atamaria, and El Sabinar. The largest site is at Cenizas–Peña de Aguila (7.56km²). The total Area of Occupancy is 10.3km² with an extent of occurrence of 83.8km². Over the last 20 years the number of individuals is estimated to have increased three-fold as a result of regeneration following fires. The current number of sexually mature individuals is estimated to be over 1000 out of a total population of 7500–8000 compared with four years earlier when the estimate was between 5000–5500. The majority of the population is east of Cartegena, especially in the Monte de las Cenzias and Peña de Aguila area within the Parque Natural de Calbanque. While the number of mature trees may increase as young trees become mature, there is very limited potential expansion in the total extent of occurrence.

Tetraclinis ranges from near sea level to 1800m and in most parts of its range precipitation ranges from 300–500mm per year. It has the ability to coppice which is an important adaptation to survive wildfires and moderate levels of animal browsing. Old–growth trees that have sprouted repeatedly over a long period form large burrs at the base, known as lupias.

Spain It occurs in a sparse open habitat where it is associated with: Pinus halepensis, Quercus ilex, Quercus coccifera, Pistacia lentiscus, Rhamnus lycioides, R. oleoides ssp. angustifolia, Maytenus senegalensis subsp. europaea, Calicotome intermedia, Periploca angustifolia, Clematis cirrhosa and Chamaerops humilis. Altitude range is from 6-390m. It grows in a range of soils, but tends to be restricted to the Triassic limestone, avoiding the metamorphic, micaceous and graphitous schists. The climate typically has long hot summers (with 150 ‘biologically dry’ days per annum) when temperatures can reach as high as 40°C and mild winters in which temperatures rarely fall below 0°C. The annual rainfall is ca 300mm; most precipitation occurs during September, October and November.  Adult trees usually respond to fires by coppicing; repeated fires prevent regeneration from seed and may eventually kill adults.

Tunisia Woodlands of Tetraclinis occur in areas with a maritime influence and a semi-arid climate in calcareous and siliceous substrates with an altitudinal range from sea–level to 700m. The main associated species do not include other tree species but instaed shrubs such as: Lavandula stoechas, Cistus monspelliensis, Genista aspalatoides, Erica arborea and the herbs Bracypodium ramosum, Avena bromoides and Lupinis angustifolius.

Historically the wood has been used for making yokes (for use in mines) and for the construction of houses. Due to its unusual grain and rich colour, burr-wood (known as Thuja-burr) has in recent years become increasingly popular especially for kitchen utensils and household ornaments. Large burls, sometimes weighing in excess of 450 kilos, are produced underground as a result of repeated coppicing following  fire, grazing or cutting. Overharvesting in Morocco has led the government to ban the export of the wood. Resin from the wood, known as sandarac gum, is used  to make liquor and in Morocco it is used as a remedy for difficult childbirth. It is has many other uses including the treatment of cramps, roundworm, tapeworm and insomnia.

Due to its extensive distribution in North Africa, this species is assessed as Least Concern although some small subpopulations (Malta and Spain) are highly threatened and there is some evidence of decline in the main parts of its range due to fire and grazing.

CR B2ab(iii)
Tetraclinis articulata was once much more common in Malta and the various places called Ghar–ghar, Ghar–ghur etc. point out to the existence of a wider distribution, and possibly small forests (Borg, 1927). It apparently disappeared centuries to decades ago, mostly due to habitat alteration and land reclamation (Stevens & Baldacchino, 2000). The Area of Occupancy (AOO) is calculated as 6km² as a result of thorough ground-based surveys. The AOO has been calculated using 1km² grid cells; the 4km² grid recommended by IUCN guidelines is too coarse for relatively small islands such as Malta. The population is severely fragmented, being limited to only 4 locations which, although only ca 5–13km apart, are isolated by urban and agricultural developments.The main threats today include habitat modification and/or destruction (including land reclamation and the clearance of the vegetation) and human-induced disturbance, including the introduction of alien species such as Acacia saligna and Eucalyptus spp. Afforestation and reforestation programmes in its distribution range with indigenous and alien trees, which do not form part of its biotope are also important threats. Competition from invasive species such as exotic Pinus spp. and particularly the native P. halepensis are also seen as threats.

LC – Least Concern
It is estimated that there are 600,000ha of forest in Morocco and although there is some evidence of degredation as a result of fire and grazing is is not thought to contributing to a significant decline in the sub-population

CR B1ab(iii)
The total extent of occurrence (EOO) is calculated to be 83.8km², with an actual area of occupancy (AOO) of 10.3km². The EOO is within the 100km² threshold for Critically Endangered. Subpopulations are fragmented and there is a continuing decline in the quality of the habitat due to the principle threat of urbanization, including the establishment of sport facilities such as golf courses. Historically, human-set fires have had the greatest impact on the populations. The most notable fire occurred in September 1992 when 55ha were burnt affecting a significant proportion of the population (Nicolás et al., 2004). Regeneration after fire can be rapid although it is estimated to take 10-20 years for burnt areas to recover (López–Hernández et al. 1995). A serious fire in the main part of the population (e.g. Cenizas–Peña de Aguila) has the potential of eradicating up to 80% of the population. Post-fire regeneration of competing species such as Pinus halepensis is a problem until the plants of Tetraclinis reach maturity. Mining has been a cause for concern in the past. The extensive heaps of spoil have caused serious fragmentation of the population. In some parts of its range (El Sabinar), regeneration is hampered by grazing for sheep and goats. Competition from invasive species is also of concern; the most detrimental species being Pinus halepensis (García Martínez, 2008). Tetraclinis is frequently cultivated in southern Spain in gardens and as a plantation species. Some of these plantations are located close to the native population. It is thought that the origin of this germplasm is the North African (Morocco) population. Genetic contamination could be a problem although to date no studies have been carried out to investigate its potential impact.

LC- Least Concern
The total area that the species covers is estimated at 35,000ha of which over 28,000ha is represented by between 25% an 75% cover. Although some of this is subject to a degree of degredation, some woodlands, particularly near urban areas (eg those near to Jbel Boukornine) suffer from repeated burning and other areas are subject to grazing, this is not significant and does not qualify as being threatened. The proposed National Assessment is of Least Concern but If the decline continues, then it may qualify as Near Threatened in the future.