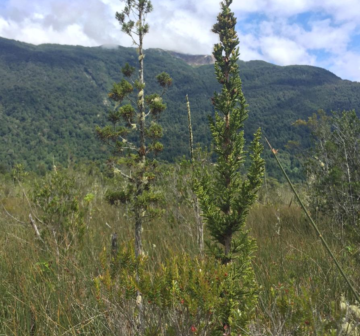 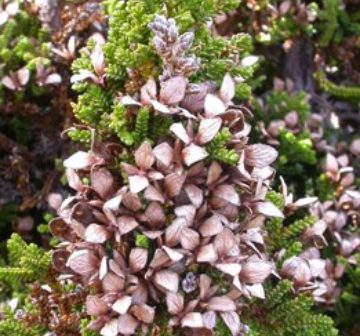 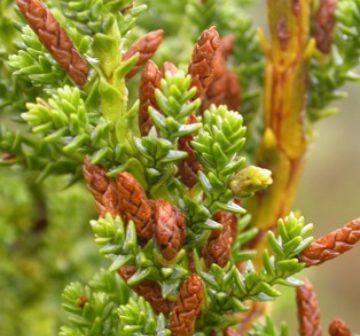 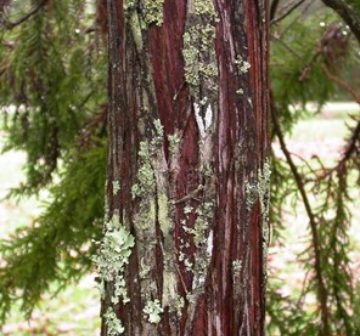 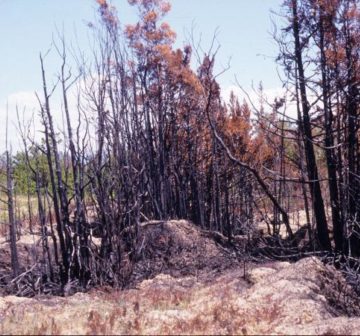 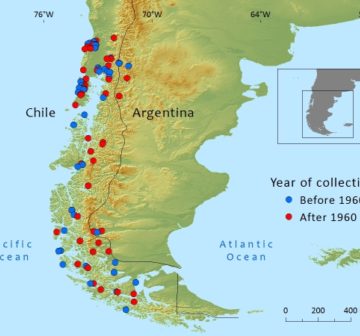 Leaves 2.5–6 x 1–2.2mm, regularly arranged in decussate pairs, incurved, triangular and keeled on the back, stomata on inner face, without stomatal bands on reverse.

Pilgerodendron uviferum could be confused with Fitzroya cupressoides. In Fitzroya the leaves are usually arranged in alternating whorls and are of two types: scale-like and strongly keeled on mature branches, falcate and flattened on immature branches. All leaves have two obvious white stomatal bands on the underside. In Pilgerodendron the leaves are regularly arranged in decussate pairs, incurved, triangular and keeled on the back.

Pilgerodendron has an extensive latitudinal distribution that extends for over 1,600km in southern South America. It is the world's southern most conifer species. In Argentina it ocurs in four provinces: Chubut, Neuquén, Rio Negro and Santa Cruz. In Chile it has a discontinuous distribution in both the Andes and the Coastal Cordillera from Region X (Province Valdivia, 39°50’S) to Region XII (Province Magallanes, 55°20’S). In Chile the estimated area of occupancy (AOO) is over 9,700 km² (CONAF et al., 1999). In Argentina the AOO is considerably less. The extent of occurrence is well in excess of 20,000 km².

At its northern distributional limit it occurs as isolated subpopulations in both the coastal and Andean ranges of Chile and Argentina. It becomes more abundant to the south and characterizes the Chilean Archipelagos south of 44°S. In Argentina it is much less abundant, and is only found at scattered sites.

It has an altitudinal range from sea-level to 1000m. Typically it is associated with Fitzroya in the coastal range on poorly drained, thin gley soils. In most of its southern distribution it is associated with many species of the evergreen and Coigüe de Magallanes forest type, especially with Nothofagus betuloides, N. nitida, Tepualia stipularis and other species that are adapted to wet soils. There are large sub-populations in the Andes of Palena, Aysén and Magallanes where wetland mallines dominate.

The timber of Pilgerodendron is decay resistant and has been heavily exploited for building and construction. In rural areas it is frequently used for bridges, poles, fencing, boats and furniture.

Pilgerodendron uviferum has a long history of exploitation that dates back several centuries. It is estimated that since the start of the 20th century (within the last three generations), there has been a decline of more than 30% in its area of occupancy and in the quality of its habitat. The principle drivers for this reduction have been logging and forest clearance for agriculture and pastoralism. The decline is ongoing.

Owing to timber cutting, cipres forest have been dramatically degraded and destroyed, particularly in Chile's XI Region. Large-scale destruction of the forest during colonial times and the widespread opening up of the lowland area have led to the extinction of the species from much of its original distribution. Illegal harvesting is still occurring in many forests. Extensive fire setting and grazing have prevented regeneration, contributing to the decline of Pilgerodendron. The most northern populations are severely fragmented and isolated, mainly as the result of conversion of native forest to commercial plantations.

In Argentina about 30% of the remaining forests are within protected areas such as Parques Nacionales Nahuel Huapi, P.N. Los Glaciares and P.N. Los Alerces (Rovere et al., 2002). In Chile, small populations occur in many protected areas e.g. Puyehue and Torres del Paine. This species was placed on Appendix I of the Convention on International Trade in Endangered Species (CITES) in 1975, which has reduced international trade.