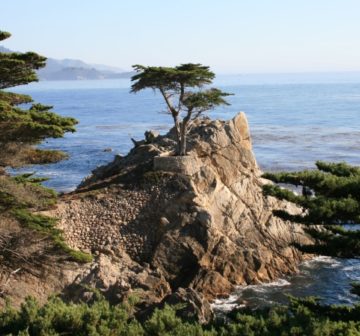 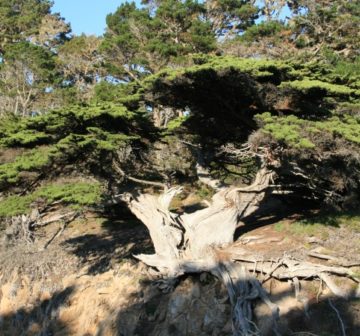 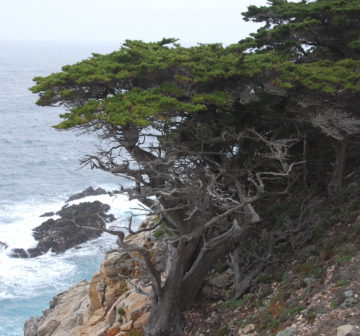 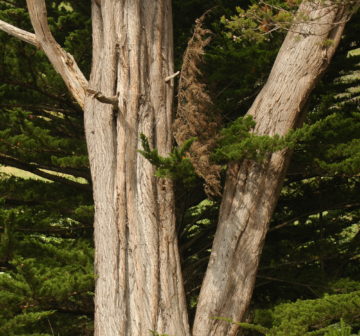 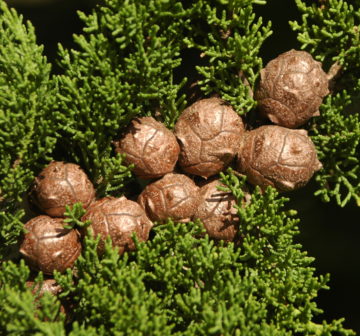 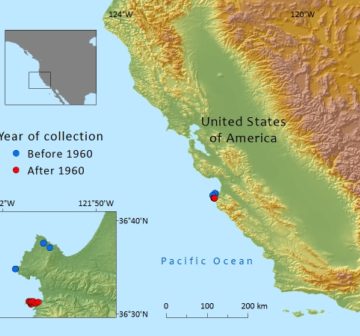 Native to the USA: California (near Monterey). This species, although widely planted and naturalized even in California, has a very limited original natural distribution in Monterey County, California. The population occurs close to the coast.

Only two sub-populations are known to occur in the wild, i.e. in original habitat; both are on the coast in Monterey County: the larger one is at Cypress Point and adjacent rocky strips of coast, the other some distance to the south at Point Lobos.

Restricted to a narrow coastal strip on rocky cliffs, slopes and headlands, forming pure stands or associated with Pinus radiata, in loam or sand over granitic rocks or in rock crevices. The climate is of the Mediterranean type, with dry summers cooled by frequent fog, within reach of ocean salt sprays, and winter rain.

This species of cypress has been widely introduced in California and around the world, in some African countries as a timber tree, but mostly as an ornamental tree and to act as wind shelter belts both in argiculture and horticulture. The wood from closed-grown trees in plantations can be used for carpentry and furniture. The tree is extremely resistant to wind and tolerant of salty ocean wind and is not easily affected by drought or pests. Its use as a hedge plant has largely been superseded by the vigorous garden hybrid Leyland cypress, of which Monterey cypress is one of the parents. Several cultivar forms, notably with yellow-green foliage, have been developed. It is of interest to note that this is one of the two conifers in nature (virtually) confined to Monterey County in California, that are among the most widely planted conifers in the world; the other species is Pinus radiata.

The population, however small and with a limited area of occupancy (AOO), appears at present to be stable, with most trees now within protected areas safeguarded from further urban and other development. However, based on its estimated area of occupancy (AOO) of only 13km² calculated from herbarium specimen locality data and a grid of 1km wide (its true AOO is likely to be less, not more) and the risk of fire, which could increase in future due to climate change, this species meets the criteria for Vulnerable under D2.

The limited distribution of this species in its natural habitat consists of two main 'groves' and a few scattered meta-populations. These are mostly situated in reserves (Del Monte Forest, Point Lobos), but also on private lands in the vicinity of ongoing urban and leisure development. As recreation and tourism are intensive in the area, there is a great risk from fires. If climate change would mean that the fog became less frequent or of shorter daily duration, the incidence of fires could greatly increase. Fires would be put out a.s.p. in urbanized areas, but probably less urgently in the reserves, such as Point Lobos, that are relatively remote from private property.

Nearly all major stands of this species are now within protected areas, but these are often adjacent to urban development, golf courses or (touristic) roads. Management of fires will be the major issue in the future to protect the natural, wild population.