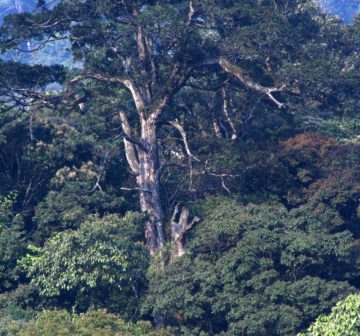 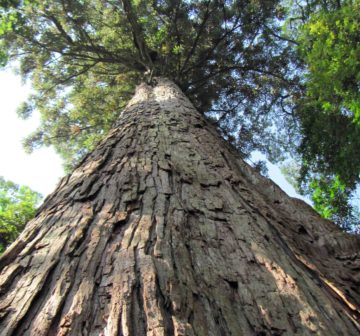 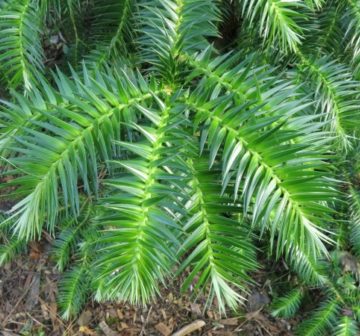 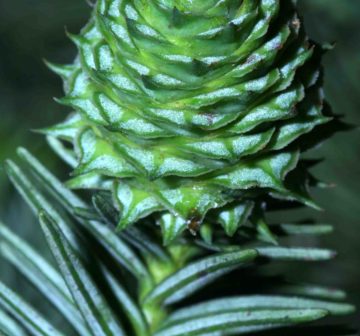 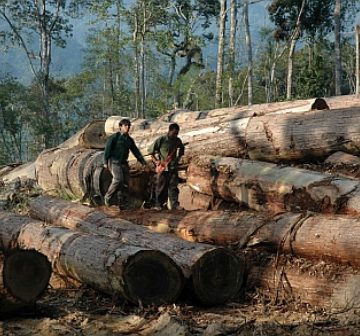 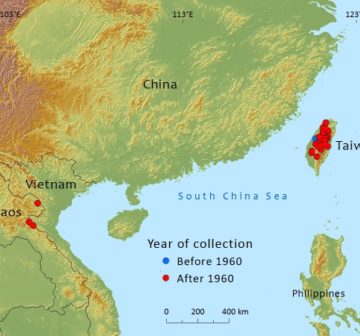 Cunninghamia konishii is found in north and central Taiwan and in a small area along the Lao PDR/ Việt Nam border in the provinces of Houaphan, Thanh Hóa and Nghệ An. These subpopulations were only discovered in the mid 1980s. It has also been reported from Fujian on mainland China (Wu & Raven 1999) but these may represent cultivated plants. Cunninghamia is a very widespread and an important forestry species in China with a history of cultivation spanning more than 800 years. Cunninghamia konishii is closely related to C. lanceolata and may represent a montane form rather than a distinct species.

In Taiwan this species occurs in the cool temperate coniferous forest belt at altitudes ranging from 900 and 2200 metres above sea-level. The climate is cool and moist with rainfall exceeding 4000mm per year. It occurs with a range of other conifers including Chamaecyparis formosensis, C. obtusa var. formosana, Calocedrus formosana, Taiwania cryptomerioides and broadleafs such as Acer morrisonense, A. kawakamii, Schima superba, Photinia davidiana, Rhododendron formosanum, Pasania sp., and the alpine bamboo Yushania niitakayamensis.

In Lao PDR and Việt Nam this species has a similar altitudinal range as in Taiwan. Rainfall is somewhat lower but well in excess of 1500mm. Associated conifer species include Fokienia hodginsii, Amentotaxus argotaenia and Podocarpus spp. Most stands are limited to steep slopes and along ridges.

Cunninghamia konishii is a tall emergent conifer (up to 40m) that relies on disturbance for regeneration. It is fast growing, especially when young. Trees with diameters above 2m have been recorded but unlike other conifers of similar stature such as Fokienia and Taiwania, C. konishii is relatively short lived with tree-ring based ages of about 800 years.

A valuable timber species due to its relatively fast growth and long straight bole. The timber is mainly used for house construction as it is durable and termite resistant.

The global conservation status for Cunninghamia konishii is based on an estimated recent range wide population decline of more than 50% and an ongoing decline in its area of occupancy. This reflects the level of past exploitation in Taiwan and Việt Nam, as well as the ongoing exploitation in Lao PDR. Previous assessments used older versions of the IUCN categories and criteria and were based on very limited information from Việt Nam and Lao PDR.

In Taiwan many stands were felled and replaced by commercial forestry prior to 1990. The remaining stands are fragmented and show little or no regeneration. In Việt Nam stands were also heavily exploited until quite recently when major changes in forestry laws were introduced. In Lao PDR it is still being heavily exploited. Cunninghamia lanceolata may be used in areas where felling is followed by replanting for commercial forestry as it grows faster than C. konishii. This raises the possibility of genetic contamination. Although little work has been done to determine the level of local adaptation in subpopulations of C. konishii, a precautionary approach should be taken and only local provenances used for replanting in areas close to natural stands.

In Taiwan there are protected populations in Yushan National Park and Taroko National Park. Remnant stands are recorded from Pù Mát, Pù Hoạt and Xuân Liên nature reserves in Việt Nam. Stands outside of these protected areas are generally within either Special Uses Forests or are controlled by Watershed Management Authorities and are theoretically protected from further exploitation. This species has not yet been recorded from any protected areas within Lao PDR: further field work in Lao PDR is necessary to establish the extent of the remaining forests.