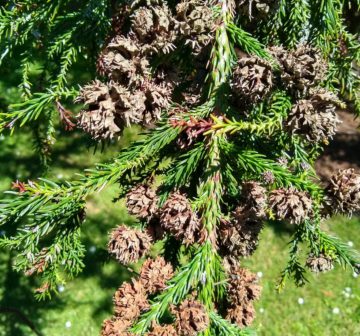 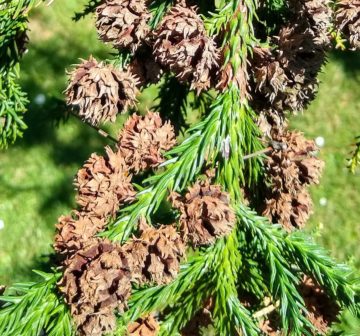 This species is found in Japan: Honshu, Shikoku and Yakushima. Within Japan, the natural distribution is discontinuous and scattered in limited areas as a result of the extensive exploitation of this species during the past 1,000 years. Yakushima is one of the few areas where natural forest still occurs and here there are many trees that are over 1,000 years old.

Natural forests that include this species are now very rare (Tomaru et al.1994) and those forests in which it still occurs have been greatly altered; the description is largely based on forests in Yakushima where an old growth forest still exists. The forest vegetation is mixed evergreen forest, with ca. 50% Cryptomeria, growing mixed or in groves; angiosperm evergreen trees are Trochodendron aralioides, Distylium racemosum, Camellia japonica, C. sasquana, Daphniphyllum spp., Michelia compressa, Myrica rubra, Quercus spp., Ilex spp., and Lauraceae; conifers are Abies firma, Tsuga sieboldii, Chamaecyparis obtusa, and Torreya nucifera; a few deciduous angiosperm trees, e.g. Stewartia monadelpha and Acer spp., make up less than 1% of tree cover. There is a diverse shrub-layer and some common climbers, e.g. Hydrangea petiolaris and Rhus orientalis; a rich cryptogamic flora covers the forest floor as well as trees, with abundant ferns, e.g. Hymenophyllum, mosses, and liverworts. The mountains on this island are of granite;

the soils are well drained yellow loam or clay, often quite deep. The climate is mild temperate, with abundant rainfall

The timber of this species is regarded in Japan as being highly valuable for construction because of its size, workability, and durability. This species is the principal conifer in Japanese forestry (ca 44% of all plantations) and almost all timber now comes from plantations. It has been introduced to China many centuries ago; in Taiwan the Japanese

established extensive plantations replacing natural forest. The wood is rather coarse grained, with reddish heartwood and light yellowish sapwood, and a typical coniferous fragrance due to volatile terpines. It is used in house construction, panelling, flooring, carpentry, joinery, and furniture making. The fibrous bark was traditionally used for roofs of houses but is now more often processed as a general fibre or composted. There are several hundred cultivars known of this species, in Japan and in Europe and North America, and the species as well as many of these cultivars is widely used in gardens and parks. Outside of its native habitat, Cryptomeria can be invasive and may readily regenerate from seed and by layering.

Natural sub-populations are small and highly fragmented. Identifying and distinguishing between natural forests and plantations makes the calculation of an extent of occurrence (EOO) and area of occupancy (AOO) problematic. However, the AOO of the natural populations is likely to be within or close to the threshold for Vulnerable. A limited decline has been reported from some areas but the extent of the decline has not been quantified. An assessment of Near Threatened seems most appropriate until better information is available.

Extensive logging has removed trees of this species in much of its natural range and few old growth forests with Cryptomeria remain. Plantation forestry in Japan has made extensive use of the species, bringing it back to many areas where it had been greatly depleted. The species is undoubtedly regenerating naturally from this stock in many forests, so that the distinction between its natural distribution and anthropogenic occurrences can only be ascertained by a detailed study of forest history in Japan that would distinguish between primary and secondary occurrence. Some plantations are established from clonal material or with material that is not of local provenance. The potential impacts on natural populations via genetic contamination are uncertain. Cryptomeria has also been identified as susceptible to changes in precipitation; recent declines in lowland forests have been attributed to climate change (Matsumoto et al. 2006).

This species is partially protected on Yakushima where the largest subpopulation occurs. Some of the smaller subpopulations elsewhere are also protected, but logging is still permitted in others.