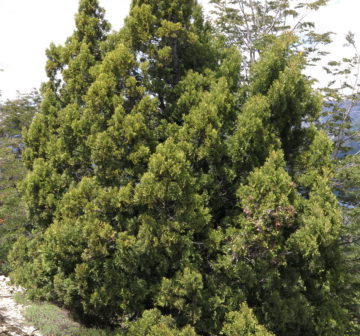 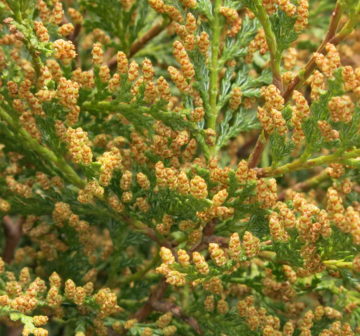 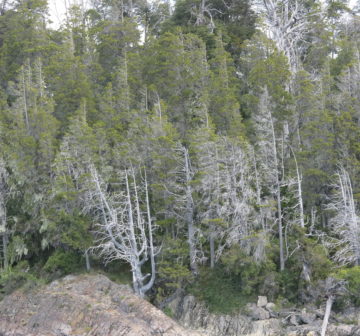 Endemic to Argentina and Chile where it is mainly confined to the Andes.

Towards the western end of the range of Austrocedrus in Argentina, particularly in peri-urban areas there has been decrease over in the past 50-60 years due to illegal cutting. However, in the east of its range, towards the steppe vegetation, there has been a noticeable expansion in its range and this trend represents an overall net gain for Austrocedrus in Argentina. In contrast, in Chile there is a net loss (Le Quesne pers. comm.).

Austrocedrus chilensis forms a large tree up to 20 m tall, with a trunk 1-2 m across. Typically it has a pyramidal habit. In its most northerly location near to El Asiento, it is capable of living for up to 1,500 years. In Argentina and Chile it is associated with a range of species depending on latitude, altitude, aspect, rainfall and soil type. It normally favours more xeric conditions than those tolerated by rainforest species (Veblen et al. 1995).

In the northern part of its range in Chile, at altitudes of between 900 and 1,600 m, it grows with species which form part of the sclerophyllous forest type such as Cryptocarya alba, Kegeneckia oblonga, Lithrea caustica and Quillaja saponaria. In some locations it can also grow in pure open stands at the tree-line, for example, in Region VIII there are large stands on steep volcanic slopes of Volcán Antuco (1,000-1,200 m).

In Central Chile it can also form stands in association with Nothofagus obliqua. At the lower altitudes it sometimes grows along rocky, river margins and is often associated with Prumnopitys andinus (Hechenleitner et al. 2005).

In Argentina it generally occurs east of the more mesic Nothofagus forests in the rain-shadow of the Andes (Veblen et al. 1995). In the Patagonian steppe, scattered trees occur on rocky outcrops surrounded by a matrix of grasses and low shrubs, with an annual rainfall as little as 500 mm. A total of 89 understory species were recorded in Austrocedrus stands in Argentina which included eight tree species. Commonly associated woody species include: Araucaria araucana, Embothrium coccineum, Lomatia hirsuta, Maytenus boaria, M. chubutensis, Nothofagus antarctica, N. dombeyi,  N. pumilio, Embothrium coccineum. Its estimated AOO of 1,411 km2  in Argentina comprises: 819.16 km2 is pure Austrocedrus forest, 534.4 km2 is mixed with Nothofagus spp. and 50.29 km2 is mixed with Araucaria aruacana. The most northern subpopulation is 32°29’S near to El Asiento; here the trees are widely spaced and grow in a water-stressed environment and can live up to 1,300 years (Schlegel 1962)

Timber was historically used for construction and making furniture. The wood is fragrant and has a durable quality suitable for outdoor use (panelling and outdoor furniture). The species is grown as an ornamental by arboreta and botanical gardens, but is not commonly seen in trade.

Austrocedrus chilensis is a long-lived conifer species capable of living for up to 1,500 years. It has many present-day threats including harmful pathogens, grazing, habitat loss through natural or human-set fires, invasive non-native tree species, establishment of plantation trees and hydroelectric schemes. Even though it has an estimated area of occupancy (AOO) of 1,860 km2 which is within the 2,000 km2 threshold for listing as Vulnerable, for the majority of its global distribution, of which 75% of its AOO occurs in Argentina, there is no net loss of individuals due to good regeneration after disturbance. It has therefore been assessed as Near Threatened as it almost qualifies for listing under criterion B2ab(i,ii,iii,v).

There are a wide range of threats to the population in Argentina and Chile. These include logging (mainly historic), harmful pathogens, grazing, invasive non-native tree species, habitat loss through natural or human-set fires and establishment of plantation trees. More recently there have been concerns regarding climate change and the effects of hydroelectric schemes in Chile. In Argentina the North American conifer Pseudotsuga menziesii, although only established as a plantation crop over the past 25 years, is already considered as a serious invasive species in Austrocedrus forests (Orellana and Raffaele 2010). Austrocedrus is extremely vulnerable to the detrimental effects of cattle grazing on postfire regeneration (Blackhall et al. 2008). Since 2003, when the insect pest Cinara cupressi was first detected in Chile, it has quickly become established throughout the country where it has caused yellowing of the foliage, branch dieback, and eventually tree death, depending on the severity and duration of the infestation (Baldini et al. 2008, Penna and Altmann 2009). Increasingly over recent years, there has been decline and mortality throughout its range caused by the condition known as ‘mal del ciprés’. This condition, which was first recognized 60 years ago, is still poorly understood but the symptoms originate in the root system and cause loss of vigour and defoliation of the crown (Havrylenko et al. 1989, Hennon and Rajchenberg 2000). This is possibly caused by the pathogen Phytophthora austrocedrae. However, even taking these negative effects into account, post-disturbance regeneration in the majority of its distribution in Argentina, is very good and as a result there is no net loss of sexually mature individuals (Kitzberger pers. comm.). This is not the case in Chile where there is a net loss, particularly in the drier parts of its range in central Chile (Le Quesne pers comm.).

Austrocedrus subpopulations show evidence of significant inbreeding and recent bottlenecks, but are still genetically diverse (Souto et al. 2012). Austrocedrus-dominated dryland forests of northern Patagonia are reservoirs of genetic diversity and might therefore be relatively resilient to climate-influenced disturbances. Studies show that Austrocedrus in the dryland steppe is capable of regeneration from fire refugia (Veblen and Lorenz 1988), passive restoration strategies should also include cattle exclusion from these areas (Blackhall et al.2008). The use of local germplasm for active restoration initiatives could also play its part in increasing the population size and counteracting inbreeding effects, however, it is crucial that a local seed source is used (Souto et al. 2012). Predicted climate change gives the opportunity for restoration trials in order to establish the species beyond its current range into new suitable areas.Since species richness and stand structure of Austrocedrus vary depending on the type of landscape, probably in response to climatic and disturbance levels, special concern should be given to the presence of nurse species, genetic structure, along with the community structure and composition (Souto et al. 2012). Austrocedrus is afforded protection in many national parks throughout Argentina and Chile. In Chile some of the largest protected areas are in Reserva Nacional Río Clarillo, R.N. Río de los Cipreses and Parque Nacional Laguna del Laja. In Argentina about 57% of Austrocedrus forests have some form of protection.