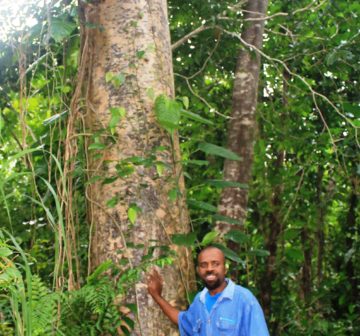 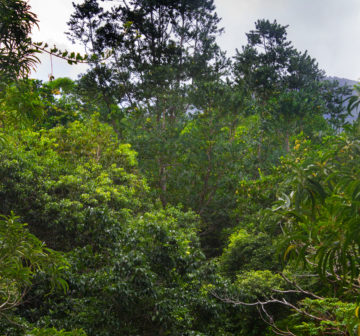 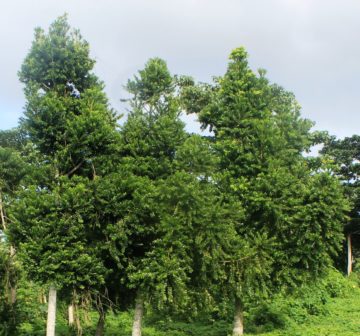 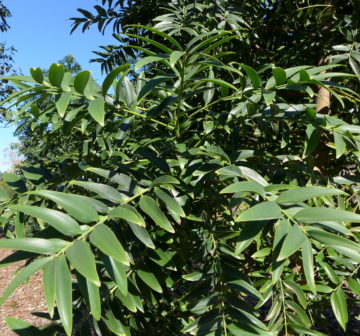 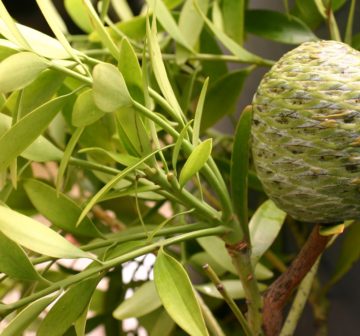 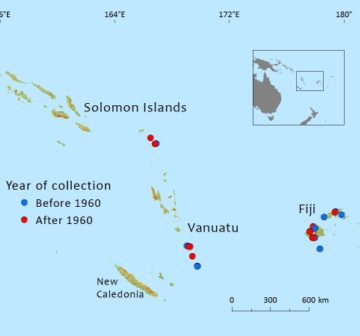 Found in the southwestern Pacific in the Republic of Fiji (Kadavu Island, Viti Levu and Vanua Levu); the Solomon Islands (Santa Cruz Group (Utupua Island, Vanikoro Island)); Vanuatu: Anatom Island [Aneityum], Erromango Island, Tanna Island. The extent of occurrence is in excess of 20,000km². The area of occupancy (AOO) is estimated to be 189km². The size of the global population is unknown.

Agathis macrophylla is an emergent tree in lowland to low montane tropical rainforest; usually growing in soils derived from volcanic rocks like basalt. Its altitudinal range is recorded from herbarium collections as being between 75 to 900m above sea-level. In Fiji on the main islands it is most common between 600 and 900m above sea-level. This species appears to behave as a normal component of rainforests dominated by angiosperms; this means that it is capable of small-gap regeneration like other large forest trees.

The wood of this species is white or sometimes with a reddish hue and known in Fiji as Dakua wood and in the Santa Cruz Group as Vanikoro kauri. It is very valuable and used for construction, for flooring in houses, for masts, booms and spars in sailing boats, for carpentry and for furniture making. Resin is tapped from trees, but also dug from the ground (subfossil resin) and used in making varnishes, pottery glazing, and dying cloth black with the smoke from burning it. Fijian kauri pine has been planted as a forestry tree in the Solomon Islands (Santa Cruz Group) and elsewhere in the SW Pacific in an attempt to obtain timber more sustainably from a truly renewable resource.

Agathis macrophylla meets the B2 criteria for Endangered as its AOO is certainly less than 500km² and there is continuing decline due to logging and deforestation in at least some parts of its range. This situation is exacerbated by the nearly total lack of protected areas relevant to the species; only one fairly substantial reserve exists.

Previously, this species was listed as Near Threatened. However, individual island populations may well be severely threatened, e.g. that on Utupua in the Santa Cruz Group. Doyle (in Farjon & Page, 1999) assessed the species separately for each of the island groups as follows: Fiji: VU - Vulnerable, IUCN 1994-criteria A2d (>20% reduction within next three generations based on current exploitation levels) and B2e (continuing decline in the number of mature individuals). Santa Cruz Islands: NE - not evaluated. Vanuatu: VU - Vulnerable, IUCN 1994-criteria A2d and B2e. Agathis macrophylla is now quite rare outside plantations in the Santa Cruz Group, though an unlogged population apparently survives on the upper Lawrence River on Vanikoro.

The major threat to this species is logging in natural forests, which is unsustainable but ongoing in some parts of its range. Deforestation has followed much logging in the past, reducing the AOO of the species, but this process, while not ceased, is slowing now.

The only protected area specifically designated for Agathis macrophylla is the Erromango Kauri Reserve in Vanuatu, on the island of that name. It protects 3205ha of rainforest with good stands of emergent Kauri. On Fiji, there are a few very small protected areas relevant to this species but almost all remaining stands of these trees are in forest without official protected status. No protected areas exist in the Santa Cruz Group on Utupua and Vanikoro Islands