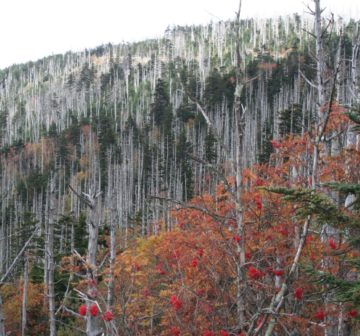 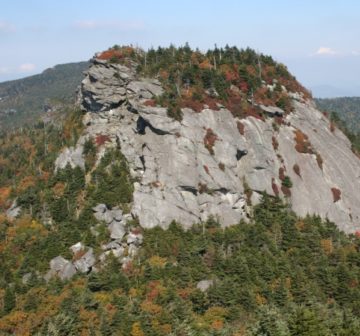 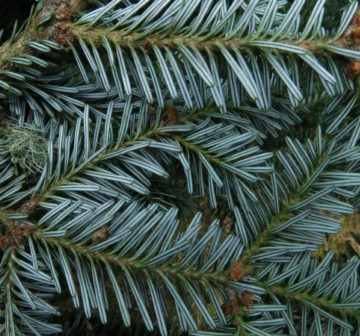 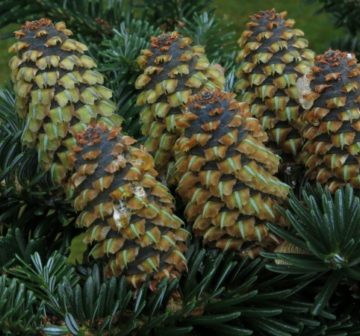 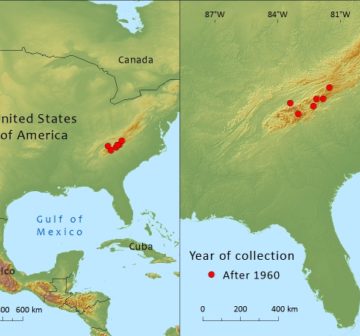 Endemic to the USA in western North Carolina, eastern Tennessee, SW Virginia (Appalachian Mts.). Small subpopulations are known from six peaks, some are within the Smoky Mountains National Park.

On the highest slopes and summits of the Appalachian Mountains, between 1200 and 2038 meters above sealevel, usually best developed on north-facing slopes. The soils are commonly podzolized and moderately acid. The climate is humid, with cool summers and cold winters with heavy snowfall, annual precipitation varies between 850 and 2000mm. Fraser fir occurs in scattered populations, sometimes pure at the highest elevations, but more often mixed with Picea rubens and Betula papyrifera above 1500m, at lower elevations also with Tsuga caroliniana, Betula alleghaniensis, Sorbus americana, Acer saccharum and Fraxinus caroliniana. Ericaceae and various herbs are common in the understorey, often thick moss carpets (Hylocomium splendens) cover the forest floor.

The remaining stands of Fraser fir have very limited commercial value as timber trees. The most important use is growing this species for Christmas trees; it is considered the best conifer available in the US for this purpose. It has a natural 'Christmas tree shape' and retains its fragrant, dark green leaves well for this indoor use. It is also widely used as an ornamental tree for gardens with several cultivars named. At least in the UK it does not usually have a very long life as a garden tree

The decline of the population due to an alien pathogen (insect) since the 1960s has been very substantial and is apparently ongoing, probably at a slower rate than initially. Its area of occupancy when calculated on a fairly comprehensive set of herbarium specimen based localities (some may now be dead trees only) even when using a grid size of 4×4km per locality (22 collections = 16 localities) remains well under 500 km² (EN threshold) and with a continuing decline this species meets the B2 criterion for Endangered.

The disjunct subpopulations of this fir, restricted to the mountain tops and their north-facing slopes of the southern Appalachians, are susceptible to destruction by windfall and fire. However, by far the most damaging agent is an insect, the Balsam woolly adelgid (Adelges piceae) discovered in 1957 in Abies fraseri on Mt. Mitchell. This alien pest has spread quickly to all subpopulations causing massive dieback through impairment of translocation flow in the cambium. Millions of trees had died by the 1980's and only one substantial population (Mt. Rogers, Virginia) remained largely unaffected (Beck, 1990). After massive die-back competitors such as Picea rubra and Betula sp. can take over dominance in several locations in North Carolina (DeSelm & Boner, 1984).

Methods to control this introduced insect are still being researched but none have been fully effective; some small scale protection can be provided by chemical insecticides. The latter strategy is very costly and is only used in plantations for Christmas trees and in some high profile recreation areas. In some stands that have died, there is massive seedling recruitment, and some of these seem to go through new infestations only partially damaged. It is hoped that eventually resistance may build up from these individuals.