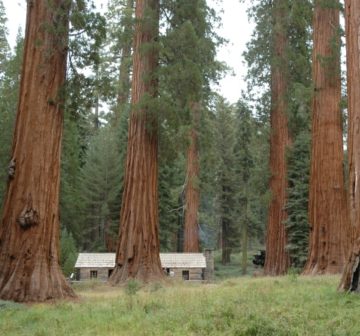 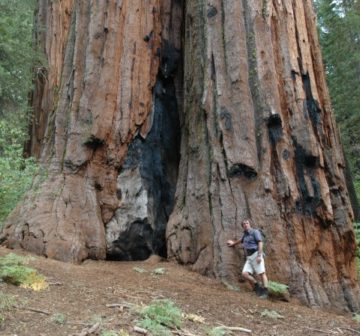 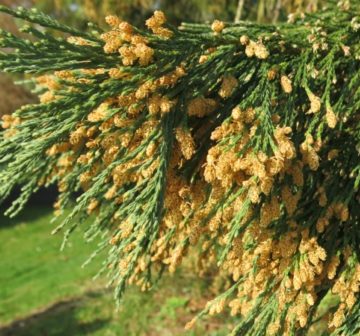 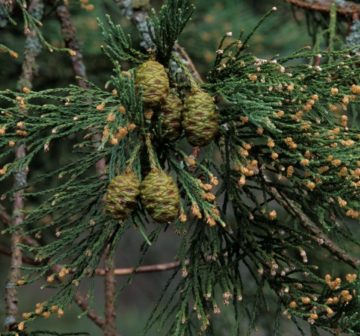 Endemic to the USA in California where it occurs naturally in the following countys: Calaveras, Fresno, Madera, Mariposa, Placer, Tulare and Tuolumne. It is known from ca. 67 groves that stretch over a length of ca. 400 km along the western slopes of the Sierra Nevada in a belt at most 25 km wide, covering a total area of occupancy of ca. 14,200 ha. Most of the groves (59) are in the two southernmost counties of Fresno and Tulare. Naturalised populations are known from Black Mountain in Riverside County in the San Jacinto Mountains (Schmid & Schmid 2012)

The present trend in recruitment of Sequoiadendron giganteum is downwards, due to competition in the absence of periodic fires in many of the protected groves. This leads over time to a downward trend in the number of mature individuals in the population. There is at present insufficient regeneration to maintain sequoia populations in these groves (Stephenson in Aune, 1992; Stephenson, 1996).

The groves consist of a few to over 20,000 individuals in the Mixed Conifer Forest belt on the western slopes of the Sierra Nevada. It occurs with other conifers including Abies concolor, A. magnifica, Calocedrus decurrens, Pinus lambertiana, P. ponderosa, P. jeffreyi, Pseudotsuga menziesii, Taxus brevifolia, and with broad-leaved trees such as Quercus kelloggii, Q. chrysolepis, Cornus nuttallii, Alnus rhombifolia, Salix scoulerana, Acer macrophyllum. Undershrubs include: Castanopsis sempervirens, Ceanothus cordulatus, C. parvifolius, C. integerrimus, Arctostaphylos patula, etc. The relatively narrow altitudinal belt, (830–)1,400–2,150(–2,700) metres above sea level, and the scattered concentration of groves, which tend to become smaller and further apart going north, indicate rather narrow climatic and soil conditions that are optimal in its natural habitat. Most groves are on granite-based residual and alluvial soils, some on glacial outwash, and mildly acidic; best growth is on deep, well-drained sandy loams with available ground water, the latter appears to be an important limiting factor. The climate is humid, with mostly autumn rain and winter snow, and dry summers, with mean annual precipitation between 900-1,400 mm, but with high year-to-year variation. Temperature in winter is mild, with light frosts but occasional extremes, and warm, occasionally hot summers. Sequoiadendron giganteum is well adapted to low-intensity forest fires (extremely thick bark) and resists windfall exceptionally well; its wood is also rot-resistant. As a result its longevity ranges from 2,000–3,000(–3,200) years.

Since its discovery by Europeans in the mid-19th century, exploitation during the latter half of that century and into the next was considerable. The trees, though of high lumber quality and rot-resistant, often shattered on impact after felling. What wood could be used was put into mainly building applications, and many larger houses in San Francisco and the Bay Area were built of its timber. No commercial exploitation of wild groves occurs at present, and most of these were protected for their scenic and scientific values many years ago. The giant trees are a major international tourist attraction in California. The Giant Sequoia is also highly regarded as an ornamental tree in parks and gardens of large homes and, being easily propagated from seed, is sold by many tree nurseries. Several cultivars have been named and are in the trade. The species also has potential as a managed-forest tree for timber production, but has found few applications in commercial forestry thus far.

Despite the fact that almost all existing groves of Sequoiadendron giganteum are in protected areas and some have been so protected for more than a century, the population is in continuous decline. The actual area of occupancy, estimated to be 142km², falls well below the threshold for Endangered (500km²) and with a continuing decline due to inadequate regeneration and natural death of (over)mature trees, which are being replaced by other, competing conifers, the B2 criterion applies and the species meets the criteria for Endangered.

Present problems include fire risks, largely due to (past) management practices which tended to benefit its coniferous competitors (especially Abies) rather than the target species, and which have greatly accumulated the fuel load for future fires to burn more devastatingly (Elliott-Fisk et al., 1997). Crown fires could easily spread from adjacent stands of other conifers. Genetic integrity of the small northernmost (and isolated) grove in Placer County is jeopardized by nearby plantings of S. giganteum from other sources (Elliott-Fisk et al., 1997).

Nearly all known groves of this species are in protected areas; many are within famous national parks or within wilderness reserves of National Forests. There is a considerable literature on the conservation aspects of this species; for compilations see Aune (1994) and Stephenson (1996). The main conservation issue is the long absence of naturally occurring fires in the protected areas where many of the groves of Giant Redwood occur. Different approaches to solve this problem, from controlled burning to selective logging, have been applied on different lands (burning in national parks, logging in national forests), but so far on too limited a scale to reverse the downward trend in recruitment necessary to maintain the population in the long term. More drastic measures seem to be needed, but are difficult to safely apply and/or are controversial (Elliott-Fisk et al., 1997).