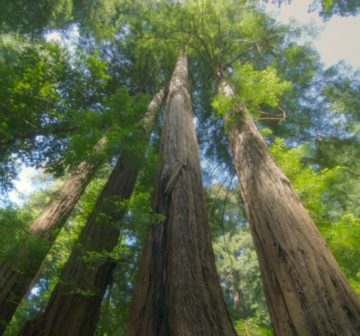 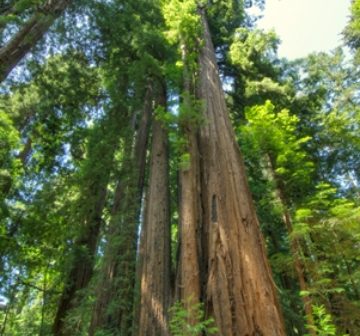 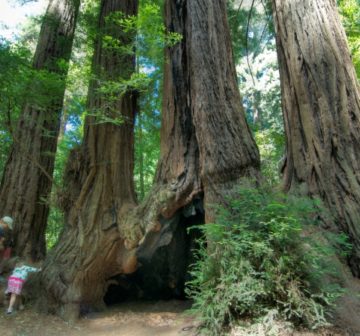 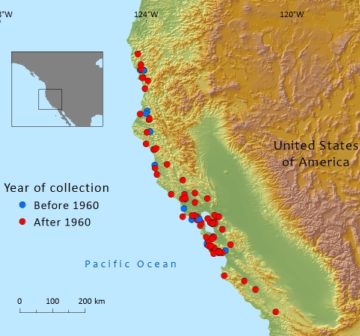 Western USA: Pacific Coast region from SW Oregon (Curry Co.), to California (Monterey Co.). The most extensive stands are in northern and central California, with outliers as far as 61km from the coast, but with (near) gaps in the Bay Area and widening again in the Santa Cruz Mountains. The species finally peters out to the south in steep canyon bottoms of the Santa Lucia Mountains. The population is still very large, but decreasing due to forestry management and practices that have a tendency to alter the composition of forests at the disadvantage of redwoods.

The famous Redwood forests form a very distinctive lowland coastal vegetation type dominated by this tallest of all trees. The altitudinal range is (1–)30-750(–920) metres above sea-level. Though pure stands of Sequoia are not uncommon especially at low altitudes on river flats near the coast, mixed stands with both conifers and angiosperms are more the rule. Most common among associated conifers are Pseudotsuga menziesii, Tsuga heterophylla and Abies grandis; most frequent angiosperm trees are Acer macrophyllum and Lithocarpus densiflorus. Especially in hilly terrain of upland sites many other tree species can be present and Sequoia often becomes a lesser component of the forest. The autecology of this species is remarkable for its capacity to resprout after damage at all levels up the tree, but especially from lignotubers forming massive, largely subterranean swellings. Evidence of fire in old growth Redwood forests attests to its adaptation to such disturbances mainly in this manner; many trees have formed several large stems around an old burnt stump. Longevity as evidenced from ring counts of boles exceeds 2000 years, but may on account of this survival strategy be substantially longer. The occurrence of frequent oceanic fog and the interception of this moisture through branchlet disposition, phyllotaxis and leaf shape in the crowns of especially old growth trees are apparently crucial to species survival in this otherwise summer dry region. Its distribution and inner limit of 61km corresponds with the inner limit of the fog belt.

The wood of this tree has been used extensively in the past for construction work wherever decay resistance was a requirement. Many of the older houses in California and Oregon were built with it, including the shingles on the roofs. Railroad sleepers and bridge timbers were other uses to which it was put. With the sharp decline in 'old growth' stands of this tree, which yielded the best quality saw timber for many of these purposes, uses have more recently shifted to specialities like turned wood products, cabinets and polished table tops from its burls or burrs, which produce knotty wood with beautiful patterns and colours. Composite (synthetic) planks are increasingly replacing redwood for home decks as the synthetics become cost-effective and have better durability and less upkeep. The thick, fibrous, and tough bark is used for insulation or mulched for application in gardens to suppress weeds in flower beds. The Coast Redwood is extensively cultivated as an ornamental tree in many countries and about 10 cultivars are in the trade. In favourable conditions growth is rapid and trees can reach impressive sizes within a century and, if their longivity in their natural range is even remotely approached, they could continue to grow for many more centuries.

According to forestry estimates in Burns & Honkala (1990) there remained by the end of the twentieth century a total of 260,200 ha of commercial forest with “more than 50% redwood stocking”, while a further 80,940 ha was ‘old-growth redwood’ mostly within protected areas. If the latter forests were also 50% redwood, this would translate in a minimal area of occupancy (AOO) of 1400km², to which would have to be added an unknown figure for redwoods occurring as a minor component. The AOO is thus likely to fall below  2000km², the threshold for Vulnerable.

Past decline is, as always, difficult to estimate as there were no accurate estimates of an AOO when logging operations began. It is almost certainly in excess of 50% over three generations, which in the case of this very long-lived species takes us back to the period before Europeans and their impact on the forest arrived in northern California.

Continuing decline is inferred from the fact that the proportion of redwood in commercially exploited forests containing this species is still declining, due to deliberate or accidental replacement by more competitive species in the early phases of succession after clear-felling, especially Pseudotsuga menziesii. Under the A2 criterion this species should therefore be classified as Endangered.

The conservation issues involving Sequoia sempervirens pertain largely to the necessary preservation of the remaining 'old growth' Redwood forest for ecological reasons and involve much less questions about survival in the wild of the species. The "redwood belt" as given on published maps of distribution comprises forest with a (co)dominance of Sequoia sempervirens, forest with the species as a minor constituent, as well as 'potential' sites, i.e. where the species has grown historically but has been removed by logging and replaced by other tree species or a different type of land use from forest. 'Old growth' Redwood forest has been greatly reduced since Europeans arrived and covers currently ca. 80,000 ha, but almost all of this is now in protected areas. Its easy regeneration both from seeds and resprouting from stumps indicate the resilience of this tree against (man-made) disturbances. On the other hand, its late successional to climax dominance coupled with shade tolerance means it is easily replaced by more light demanding conifers such as Pseudotsuga menziesii. This can be made 'permanent' if forests are chosen to be so managed, as indeed they tend to be in commercial forestry operations. This means, that outside protected areas Sequoia sempervirens is often replaced after logging by Pseudotsuga menziesii (and to a lesser extent by Abies grandis and Tsuga heterophylla), or that its proportion in the forest composition is reduced. This occurs especially in the absence of fire after logging. Selective logging of redwood has similar effects, especially in more southern subpopulations. A second cause of decline of AOO for redwoods is urbanization, at present a relatively minor factor, but predicted to increase much in the next few decades (Noss, ed. 2000). We therefore infer that there is a continuing decline in the population.

It is imperative to place all remaining ‘old growth’ forest in which this species is a component under strict protection; the greater portion of these forests is already so protected. Logging the species should be under stricter regulation allowing regeneration to maturity of this species on all sites where it occurs in commercially exploited forests. This may require subsidies to landowners. This species is present in many protected areas, including a national park dedicated to the species. However, an estimated 82.5% of all redwood forest was in private/tribal ownership in 2000 (Noss, ed. 2000) and protected areas do not cover the entire genotype and/or all ecotypes present.