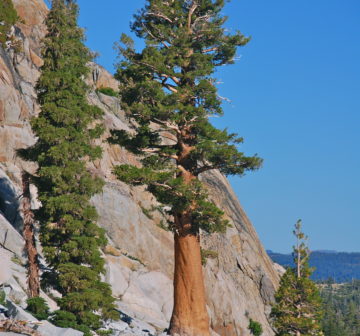 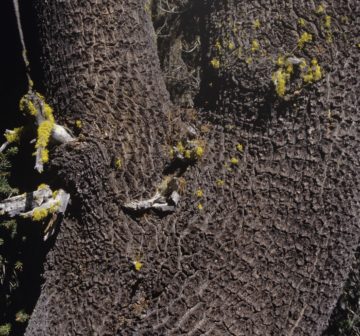 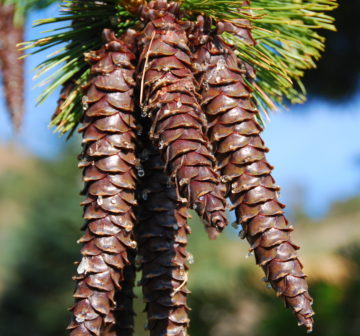 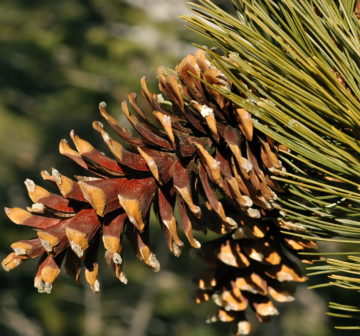 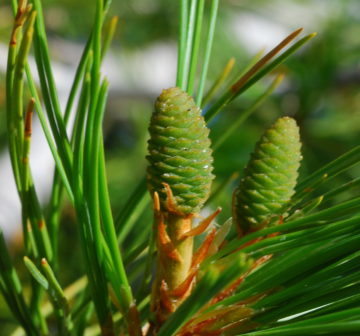 Found in western North America, from British Columbia to California, most widespread in the north of its range. Both the extent of occurrence (EOO) and area of occupancy (AOO) are beyond the thresholds for any threatened category.

Pinus monticola has its greatest extent in the cool maritime Pacific Northwest of the USA and Canada, its southward spread is limited to the western slopes of the high mountain ranges. In interior British Columbia it is restricted to the valleys and basins and does not ascend beyond 450 m a.s.l. while in the Sierra Nevada of California it climbs to beyond 3,000 m. In the interior and in the south, this species occurs on a diversity of soil types. Pinus monticola can form extensive pure stands, but old growth forests are usally mixed conifer forests with several other species. Depending on region and site conditions, the most common are Pseudotsuga menziesii, Pinus contorta, P. ponderosa, P. lambertiana, P. jeffreyi, Tsuga heterophylla, Larix occidentalis, Abies grandis, A. lasiocarpa, A. magnifica, A. concolor, A. procera, Thuja plicata, Calocedrus decurrens, Picea sitchensis, P. engelmannii, and Tsuga mertensiana. More local are Chamaecyparis lawsoniana, Pinus balfouriana, P. flexilis, and P. albicaulis. Taxus brevifolia is an understorey conifer. Broad-leaved trees are less common and usually restricted to sites with better moisture and nutrient availability. These are some of the most diverse conifer forests in the world. Pinus monticola is an early seral species in this assembly and requires disturbance of the forest (by fire, storm or felling) to regenerate.

Western White Pine is an important timber tree which yields high quality, straight-grained wood of good dimensions and strength. It is used for interior construction and panelling, doors and windows of houses and plywood; other applications of the wood are furniture, matches and tooth picks. Matches have become a major application of the wood of smaller trees of this species produced in secondary growth forests. Its wood does not produce sugary exudates (resin containing a high content of saccharine) as in P. lambertiana, a closely related species of the American West. Western White Pine grows rapidly and can be easily regenerated after felling and grows straight up forming tall stems. As with P. lambertiana, its susceptibility to Western White Pine Blister Rust (Cronartium ribicola, Basidiomycota) makes it unsuitable as an exotic timber tree in Europe and other parts of the temperate climate zones where this pathogen occurs. It is present in a few arboreta and landscape parks, but uncommonly used in horticulture and only a few cultivars are known from this species.

Pinus monticola has a very large extent of occurrence and also a very substantial area of occupancy, both beyond the thresholds for a threatened category. Decline overall is difficult to estimate, but there are estimates of substantial reductions in regeneration in at least one major area (from 44% to 5% between 1941 and 1979) due to competition and pine blister rust. Suppression of fires in the forests is still ongoing, although in national parks and wilderness reserves this is no longer a priority in managing these forests. On the other hand, clear-cutting can benefit regeneration of this species, so it may have increased especially in cut-over areas in British Columbia and elsewhere. This means that the population reduction is likely to be below the threshold for listing as Vulnerable under criterion A4ce, if indeed there is an overall reduction, partly in the past, and projected into the future. The species is therefore listed as Near Threatened.

Management of forest fires closer to a natural cycle than was done in the past should be considered and planned for major stands with this species.