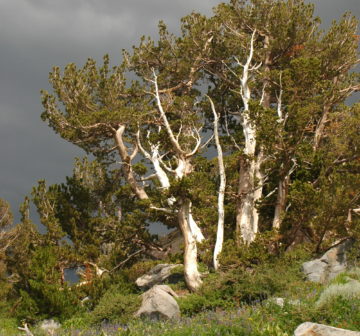 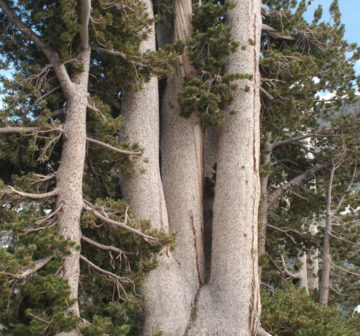 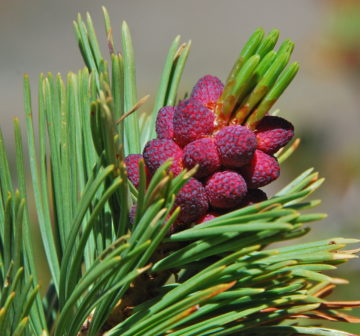 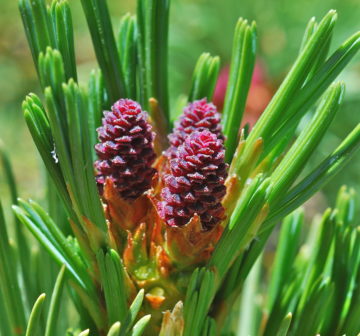 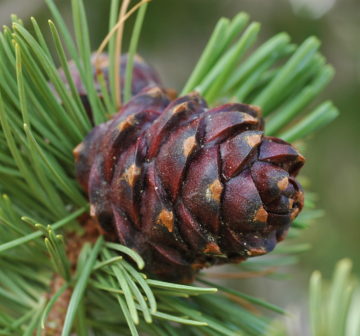 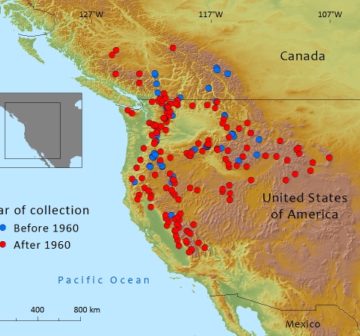 Whitebark pine is distributed in the USA and Canada. Its distribution is split into two broad sections, one following the British Columbia Coast Ranges, the Cascade Range, and the Sierra Nevada. The Rocky Mountain distribution extends along the high ranges in eastern British Columbia and western Alberta, and southward at high elevations to the Wind River and Salt River Ranges in west-central Wyoming. The species occurs as high as 3050 to 3660m in the Sierra Nevada and northwestern Wyoming, 2590 to 3200m in western Wyoming and as low as 900m in the northern limits of its range in British Columbia. The total global extent of occurrence has been estimated to be 337,067km² with an estimated 190,067km² in Canada and the remaining 147,000km² in the U.S.A. (COSEWIC, 2010). The global area of occupancy has not been calculated but would be in excess of 2000km².

In the USA, outlying populations of whitebark pine are found atop the Sweetgrass Hills in north-central Montana 145km east of the nearest stands in the Rocky Mountains across the Great Plains grassland, in outlier stands in the Blue and Wallowa Mountains of northeastern Oregon and in small, isolated ranges in northeastern California, south-central Oregon, and northern Nevada (Arno & Hoff, 1990). The oldest known whitebark pine tree is found in central Idaho on the Sawtooth National Forest (Perkins & Sweetnam, 1996). Over 90 percent of whitebark pine forests occur on public lands in the U.S. and Canada.

In the U.S.A. Whitebark pine occurs on 5,085,904 acres (20.06% of the total) on 12 National Forests in northern Idaho and Montana: 2,773,620 of those acres (54.5%) are within wilderness or inventoried roadless areas and another 40,661 acres are designated or proposed research natural areas (Shelly et al., 2010). Another 427,000 acres of whitebark pine occur in three National Parks in Montana and northwestern Wyoming (from NPS websites). Acreages for other areas not available. In Canada the total population is estimated to be around 200 million trees (COSEWIC 2010).

Whitebark pine is a keystone species of the upper and subalpine ecosystems. It is also a foundation species for protecting watersheds as it tolerates harsh, wind-swept sites that other conifers cannot, the shade of its canopy regulates snowmelt runoff and soil erosion, and its roots stabilize rocky and poorly developed soils (Tomback & Kendall, 2001). Whitebark pines may live in excess of 1000 years. While Whitebark Pine can begin to produce cones at 30-50 years, sizable cone production usually begins at 60-80 years (COSEWIC, 2010). An average generation length of 60 years is used in this assessment.

Between 1860 to 1940, billions of board feet of whitebark pine were cut to support the Montana mining industry; the wood was used for fuelwood in smelters and to heat miner‘s homes; now less than 1000 acres in the United States are harvested each year, typically within a timber sale for lodgepole pine (Losensky, 1990).

There is no question that Pinus albicaulis is experiencing serious decline due to White Pine Blister Rust (WPBR) and Mountain Pine Beetle (MPB). In areas where WPBR and MPB are both present the decline in population numbers and population resiliency is such that population sustainability over the long-term is predicted to decrease. Work is being conducted to identify seed trees that exhibit some degree of resistance to WPBR. This work is being complicated where populations are also under attack from MPB. Additional research needs to be initiated into the affects of WPBR and MPB on the mutualism between corvids and whitebark pine pine in regard to seed dispersal. Initial research indicates that when seed-producing trees decline in number, a point is reached where Clark’s nutcracker does not visit the site. Without the caching of seed by Clark’s nutcracker recruitment of seedlings will not occur and local population expirtation is expected. Although concrete figures cannot be given for the entire range of the species, a decline rate of 50% as a minimum figure, incorporating both past decline and suspected future decline, is reasonable and therefore qualifies the species for Endangered under criterion A4.

The initial reduction in whitebark pine is attributed to the exotic pathogen, white pine blister rust (Cronartium ribicola) introduced in whitebark pine cover types ca 1925 (McDonald & Hoff, 2001). Mean blister rust mortality is 35% (range of 8–58%) and mean infection of 66% (range of 17–89%) in stands sampled throughout the northwestern United States and southwestern Canada (Kendall and Keane 2001). Whitebark pine does possess documented rust resistance. Artificial inoculation trials of the open-pollinated, phenotypically rust resistant trees in the Northern Rockies indicate rust resistance ranges from 30% (Hoff et al., 1980) to 47.4% (Mahalovich et al., 2006). In the Cascade Range, the percent of canker-free seedlings in 26.3% (Sniezko et al., 2007). The more recent mortality can be attributed to wildfire and a native pest, mountain pine beetle (Dendroctonus ponderosae Hopkins). The likelihood of continuing mortality due to these disturbance agents is very much linked to the future cyclic pattern of warm weather and drought at higher elevations where whitebark pine is abundant (Logan & Powell, 2001). There have been three outbreaks of mountain pine beetle during this time. The first one in the 1920s–30s killed significant areas of whitebark pine and left many “Ghost Forests”. The second outbreak was in the 1970s–80s. The third one began in 2001 and has been killing significant areas of whitebark pine over the last few years (Shelly et al., 2010).

Approximately 60 years of fire suppression have resulted in seral replacement of Pinus albicaulis to Abies lasiocarpa, Picea engelmannii, Tsuga mertensiana, (Keane & Arno, 1993), and Pinus contorta. Due to whitebark pine’s range in the upper subalpine and alpine forests, it is presumed the impacts of warming temperatures will result in a decline in suitable habitat, increase mountain pine beetle activity, an increase in the number, intensity, and extent of wildfires (Aubry et al., 2008). A Random Forests multiple regression tree was used to generate a bioclimate model for whitebark pine based on the Hadley and Canadian General Circulation Model (1% increase GGa/yr) to estimate the climate of each pixel; by 2090, Warwell et al., (2007) predict whitebark pine is projected to diminish to an area equivalent to less than 3% of its current distribution. Koteen, 1999) predicts climate change will probably affect the whitebark pine distribution, especially forests at the lowest elevational range.