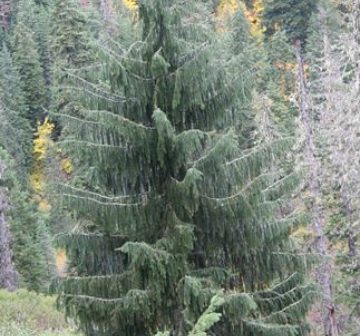 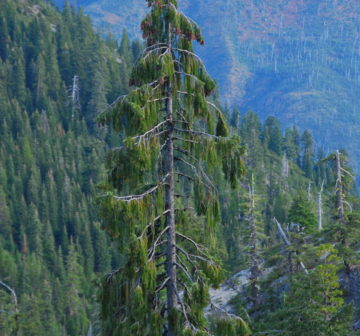 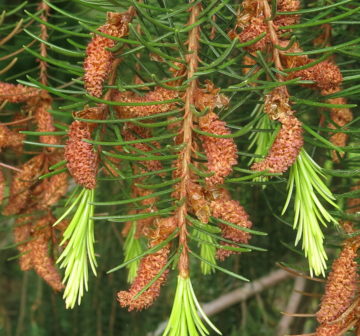 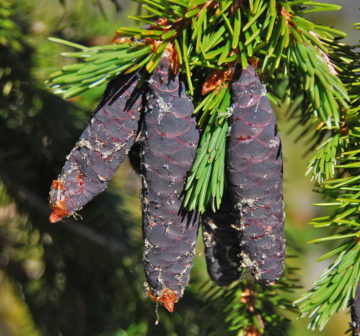 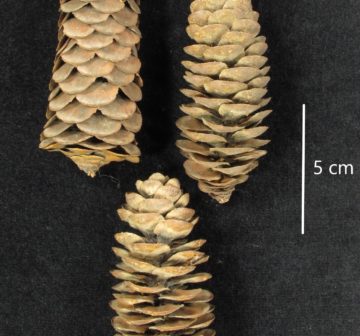 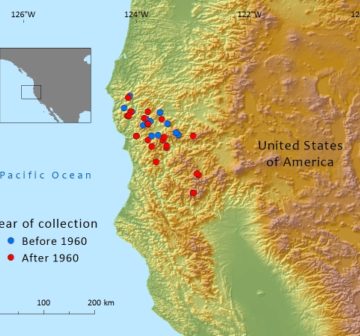 This species has a highly fragmented range in the Klamath Ranges of northwestern California and southwestern Oregon near the Pacific coast of North America. The best developed stands are on the high ridges of the western Siskiyou Mountains in California and Oregon. Other concentrations are found on high ridges and in upper valleys of the Marble, Salmon, and Trinity Mountains of California (Griffin & Critchfield, 1972). The area of occupancy is estimated to around 775km² while the extent of occurrence is estimated to be 12,000km². It is knwon from 6-8 locations.

Brewer spruce has a restricted geographic and elevational ranges, but is ‘not as rare as the literature suggests.’ (Griffin & Critchfield, 1972). NatureServe ranks it as a G4, “ Very limited in distribution, occurring only in southwestern Oregon and adjacent northern California, but considered locally abundant within its range.”(NatureServe, 2010) However, NatureServe last ranked this species in 1999, before several large fires killed substantial subpopulations of Brewer spruce.

Despite its restricted distribution, Brewer spruce has a broad ecological amplitude. Its apparent limitations are high water tables and frequent fires. Brewer spruce is quite tolerant of soil moisture stress, cold temperatures, low light, low-fertility soils, and snow. Although Brewer spruce can tolerate considerable soil moisture stress, it is sensitive to high evaporation demands. It grows in a climate of cold, wet winters and warm, relatively dry summers with respective temperature ranges of –1 to 5 deg C and to 11–20 deg C with an annual precipitation varying between 1000–2800mm). Stands occur on north-, south-, east-, and west-facing slopes, but the preferred habitat is steep, north-facing slopes. It occurs on rocky ridges, cold hollows, and on dry talus and moraines. It never occurs in areas where the soils are saturated during the growing season, such as boggy or wet areas. It grows on soils developed from sedimentary, granitic, serpentine, and metavolcanic rock. Most soils are shallow, rocky, and undeveloped; however, it does occur on deeper soils. Soil pH ranges between 4.6 and 7.2 on mica schist, metavolcanic, granitic, and ultrabasic soils. Soil depth varies between 12 and 50 inches (6.5–127 cm). This species is a weak indicator of serpentine soils (Safford et al., 2005). Heavy metals, especially iron and nickel, can attain high levels in soil and plant tissues. Brewer spruce is very shade tolerant and can become established under an almost closed canopy. It is usually occurs in late seral or climax communities but can also invaded seral pine stands and montane chaparral. It is restricted to less fertile soils because of strong competition from other conifers.(Cope, 1992). Natural regeneration is abundant under dense Brewer spruce-white fir stands and these stands contain an average of 1360 Brewer spruce and 3,460 white fir seedlings per hectare less than 15cm in height. Brewer spruce seedlings cannot survive strong sunlight. The shallow, slow-growing root system causes the seedlings to be susceptible to the high moisture stress and temperatures of exposed sites. Brewer spruce seedlings are usually lacking in clearcuts, even when these are adjacent to stands containing large cone bearing trees. (Thornburgh, 1990).

The wood of Brewer spruce has no special uses. Harvested trees are normally mixed with other species and utilized as low grade lumber. In Europe, it has been a popular ornamental conifer (Thornburgh, 1990)

Whereas only a modest overall decline of the population has been reported, the EOO and AOO fall within the thresholds for Vulnerable (20,000 km² and 2,000 km² resp.) and it is only known from 6-8 locations. There has been a recent decline which is expected to continue. Forest fires are an ongoing threat; these could increase if climate change caused longer spells of drought and fires would intensify. The smaller, isolated sub-populations would especially be at risk. It is therefore projected that further decline will result, and this species therefore meets the criterion for Vulnerable under A3, A4, B1 and B2.

The biggest threats are a combination of fire and climate change, especially where fire kills a population of the trees and climate has been altered sufficiently to preclude successful regeneration (Skinner, C. Pacific Southwest Research Station, pers. comm. 2011). Thin bark and long weeping branches make Brewer spruce susceptible to fire. Areas predictably occupied by Brewer spruce are limited to fire-resistant open forests on north-facing slopes or rocky ridges. The increased potential of forest fires and inability of Brewer spruce seedlings to tolerate high moisture stress may result in its rapid extinction. Global warming could threaten the existence of this species (Ledig et al. 2012). A series of major forest fires in 1987 burned throughout the range of Brewer spruce but most of the small, pure stands on north slopes were not damaged. In the more prevalent mixed stands, low-intensity ground fires killed trees and white fir [Abies concolor], but the thick-barked Douglas-fir (Pseudotsuga menziesii), pines, and California red fir (Abies magnifica) survived. The recovery of Brewer spruce may take decades or centuries because of the extent of these fires. The 2002 Biscuit Fire of southwest Oregon, burned through Babyfoot Lake Botanical Area and killed most of the trees within the area. Although some mature seed producing trees survived on rocky slopes near the edges of Babyfoot Lake and near Hungry Hill, the post-fire environment within the botanical area is generally unfavorable for Brewer spruce regeneration. Brewer spruce seedlings are typically unable to survive in strong sunlight and are intolerant of moisture stress. Additionally, Brewer spruce seedlings have a difficult time competing with other much faster growing conifer species such as Douglas fir and white fir. A paucity of Brewer spruce seedlings have been located during surveys of the botanical area post-fire. In Rock Creek Butte Research Natural Area, California, the entire population of rare Brewer spruce burned during a 2008 wildfire. Climate envelope modeling for this species suggests that there will no longer be favorable habitat for Brewer spruce in the future of California (Ledig et al. 2012).

Other Damaging Agents- The shallow root system of Brewer spruce makes it more susceptible than its associates to windthrow. In some areas, the high incidence of root rot (Heterobasidion annosum) further lowers its resistance to wind (Thornburgh, 1990). On commercial timber land, this species is logged when mixed in with other conifers, but is not sought after specifically.

Much of the existing range of Brewer spruce is in federal ownership. The best developed stands located on high ridges and upper valleys of the Klamath, Shasta-Trinity, and Six Rivers National Forests of California and in the Siskiyou and Rogue River National Forests of Oregon. It also occurs in two Research Natural Areas—Rock Creek Butte RNA on the Klamath NF of California (burned in 2008), and the Brewer Spruce RNA on Bureau of Land Management Land in Oregon. In addition the Indian Creek Brewer Spruce Special Interest Area was established on Klamath NF, and the Babyfoot Lake Botanical Area on Rogue-Siskiyou NF included substantial Brewer spruce, which burned in 2002. Brewer spruce occurs in the Trinity Alps and Marble Mountain Wilderness Areas (federal) and in Castle Crags State Park, California. In Rock Creek Butte Research Natural Area, California, the entire population of rare Brewer spruce burned during a 2008 wildfire. Climate envelope modeling for this species suggests that there will no longer be favorable habitat for Brewer spruce in the future of California, and therefore on-site restoration is not appropriate (Ledig et al. 2012) although after a fire is the best time to attempt regeneration and establish a refugium for Brewer spruce in its current native habitat (Cole et al, 2010). Existing stands of Brewer spruce could be protected from wildfire to some degree by fuel reduction treatments around their perimeters. Fine scale climate modeling may identify suitable habitats where this species could be maintained in refugia.