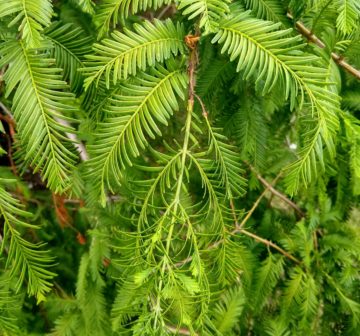 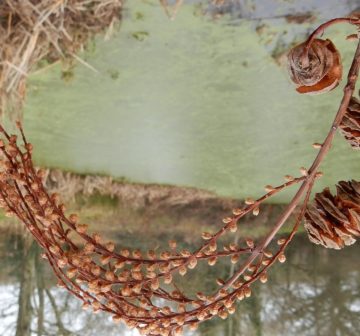 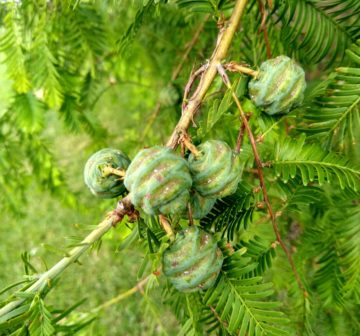 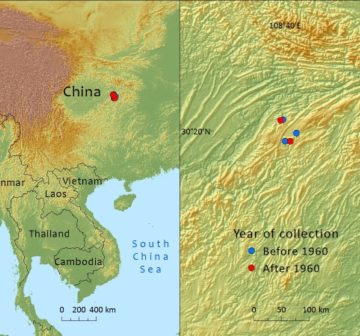 Wang et al. (2006) have given a count of "original natural Metasequoia mother trees" (ONMMTs) in the three areas where this species occurs naturally. The greatest number (counted 2002–03) was in Lichuan (Hubei) with 5360 trees >20 cm d.b.h.; only five ONMMTs were found in Longshan (Hunan) and 28 in Shizu (Chongqing), giving a total of 5393 ONMMTs, a fall in number of 386 (ca. 7%) from a previous count carried out 20 years earlier. It is unclear what is exactly meant with ONMMTs and if these are really all unplanted trees. Much destruction had been going on especially in the late 1950s with Mao Zhedong's programme of rural iron smelting, while new trees have been planted after this time. The prohibition of cutting this species has led to a depletion of the mixed forest, leaving mainly M. glyptostroboides in those side valleys of the Xiaohe (Shuisanba) Valley in Lichuan where forest still persists.

The ecology of Metasequoia in undisturbed valley forests can only be reconstructed from palynological data and from clues obtained from field observations in the lower sections of some little side valleys of the Shuishaba Valley, where relatively undisturbed stands occur on probably suboptimal sites. Remaining large trees in the valley proper are surrounded by cultivated fields (mainly rice) and both native and introduced tree species, constituting in its most natural state a secondary vegetation. Though some of the trees of Metasequoia have also been planted, it is likely that the largest and oldest trees in the valley are survivors. It is a riparian species that occupies a habitat similar to that of Taxodium distichum; the remnant old trees may be the vestiges of an extensive flood plain forest that existed before this valley was transformed to agriculture only a few centuries ago. Away from the valley floor the trees are restricted to the moist bottoms of ravines and in contact with seepage water. The valley forest would not have been pure Metasequoia, but mixed with angiosperms, among which were very likely species of Acer, Castanea, Populus, and Quercus, as well as Liquidambar acalycina, Nyssa chinensis, Pterocarya hupehensis and other trees tolerant of periodic flooding. The soil is clay and sand derived from sandstone, with slightly acid to neutral pH and a strongly fluctuating but not deep water table. The climate is characterized by hot summers and cold winters.

In the past, trees of this species must have been used for construction timber locally. Evidence of branch cutting for firewood can be seen in the photograph of one of the earliest discovered trees, a picture that has been widely published. Its use is now prohibited in the 'Metasequoia area' but the species has been widely planted, as an amenity or forest tree in China and as an ornamental in many other countries with temperate climates. This conifer is one of the most remarkable success stories of introduced trees to date; since its first introduction to the USA and Europe in 1948 it has spread to almost every country with a temperate climate. Several cultivars have been named, especially in the Netherlands. The phenotypic variation observed in planted trees obtained from early seed introductions may indicate genetic diversity, but trees with somewhat stunted and contorted lower trunks may also be due to suboptimal growing (climatic?) conditions. It would seem that warm and humid summer conditions are conducive to rapid growth, producing straight, erect trunks and long branches.

The extent of occurrence is well within the threshold for Endangered. Although there are 18 locations, the population is severely fragmented. There has been a recent decline in the quality of habitat and number of mature individuals. While the mature, large trees have all been declared protected, habitat protection is overall inadequate, which means that the survival of this very interesting species in its natural habitat is not guaranteed (Bartholemew 1983, Fu & Jin; 1992, Wang & Guo, 2009).

This 'conservation flagship' conifer species occurs in a limited region in the border area of two Chinese provinces and Chongqing Municipality (formerly E Sichuan province) in what is now intensively cultivated and utilized countryside. It appears that at least the older trees are relicts of a riparian Metasequoia forest, which may have stretched unbroken in valley bottoms before farmers moved into the area only a few centuries ago (Chii & Cooper, 1950). The several subpopulations are all reduced to a few to several mature trees, sometimes even a single tree, with little chance of natural generation due to changes in land use by a growing agrarian population. Secondary woodland in some narrow side valleys, where Metasequoia may occur along permanent streams, are under pressure of grazing and cutting of firewood. The mature, large trees have all been declared protected but habitat protection is overall inadequate (Bartholomew et al., 1983; Fu & Jin, 1992), which means that the survival of this very interesting species in its natural habitat is not guaranteed.

The mature, large trees have all been declared protected. A detailed account of proposed and implemented protection measures is given by Wang & Guo (2009). Their main recommendation is for the responsible authorities to move on from tree protection to habitat protection.