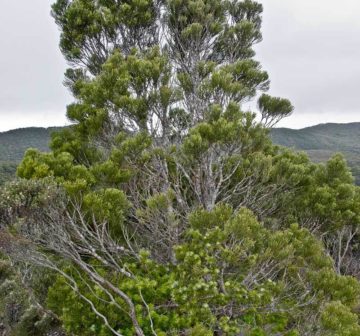 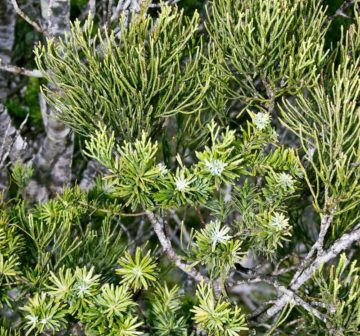 Endemic to North and Great Barrier Islands, New Zealand where it occurs between Hokianga and Manukau Harbor and in the southern part of the Coromandel Peninsula.

Halocarpus kirkii is an uncommon forest tree occurring in lowland subtropical mixed evergreen forest to a maximum altitude of ca. 700 m. In the Waitakere Ranges near Auckland the Kauris (Agathis australis) form emergent trees, with Dacrycarpus dacrydioides, Dacrydium cupressinum, Podocarpus cunninghamii, Prumnopitys ferruginea and occasionally Halocarpus kirkii together with various angiosperms making up the main canopy below them. Tall tree ferns (Cyathea, Dicksonia) often are abundant and can reach the canopy as well. These are rainforests with abundant epiphytes in the larger trees and numerous smaller trees and shrubs in the understorey.

In mature kauri forest it is most usually found in apparently even aged cohorts of 10 or less trees along ridge lines, in swampy hollows or at gully heads. This species appears to thrive on disturbance and it is at its most abundant on the margins of kauri and gumland vegetation sites originating from past fires, gum digging and/or kauri logging (NZPCN 2003)

H. kirkii is a podocarp with fine grained wood suitable for construction timber, a use to which it was put in former times when it was more common around Auckland and in Northland. It is now protected from logging and most trees occur in forest reserves. This species is not recorded in cultivation, but may be present in a few botanic gardens.

The historical reduction in area of occupancy (AOO) of this species has been large, but most of it has taken place more than a century ago (three generations is 90 years). Since then the AOO has gradually stabilized (currently estimated at 320 km2), while the extent of occurrence remains very much what it probably was before European settlement. Succession of forests in the reserves could lead to dominance of Kauri (Agathis autralis) and, in theory, some decline of Halocarpus kirkii in future. It is therefore listed as Near Threatened as it almost qualifies for a threatened listing under criterion B2ab(v).

As a native tree this species is now protected from logging under the laws of New Zealand. Several populations occur within protected areas, others are on private land. The distribution of protected forest areas more or less covers the EOO as formerly occupied by this species. Natural regeneration is good where mature trees occur and is also complemented by revegetation initiatives: these measures will lead in the near future to an increase in AOO and/or abundance