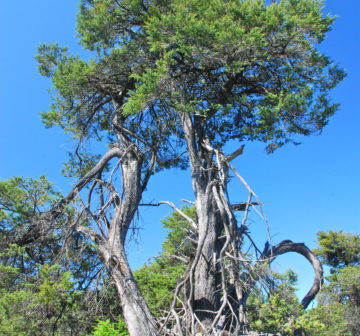 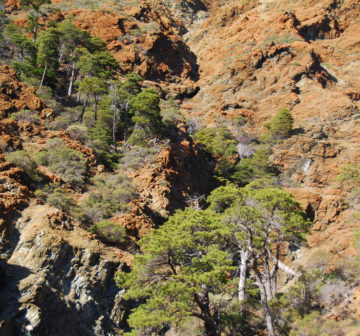 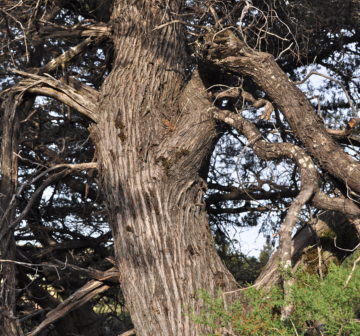 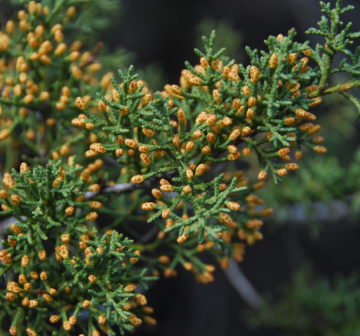 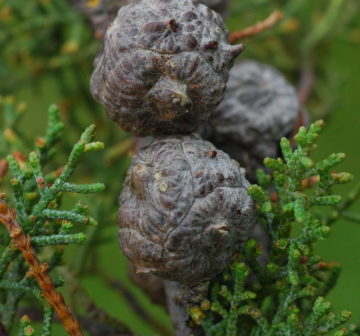 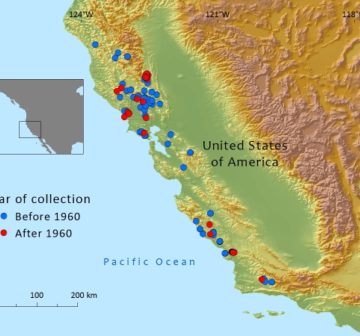 Endemic to the USA in California where it occurs in the Coast Ranges, divided into a northern and a southern group of (sub)populations. The northern group is more widespread and is mostly found north of the San Francisco Bay area to ca. 40° N; the southern group occurs mostly in the Santa Lucia Range. The distance between the two main groups is more than 250km. Numerous scattered groves occur in the Coast Ranges from northern Mendocino County south to Santa Barbara County.

This species is not at all rare. It is locally abundant in scattered subpopulations along 650 kilometres of coastal ranges. Some of the most extensive stands are in the Eden Valley region of eastern Mendocino County. Another large subpopulation exists in the Cedar Mountain Ridge (Alameda County) which is thought to have the most vigorous seedlings due to germination in serpentine soil.

Sargent Cypress is a component of the northern interior cypress forest. This community is an open, scrubby forest, maintained through fire. It occurs in dense thickets as well as in open groves and sparse stands which are widely scattered throughout its range. The species is associated with serpentine chaparral, and intergrades on less severe sites with upper Sonoran mixed chaparral, montane chaparral, or knobcone pine forest community types. On more mesic sites the northern interior cypress forest intergrades with mixed evergreen forest or montane coniferous forest. It is associated with Sequoia sempervirens, Pseudotsuga menziesii forest and North Coast forests in Mendocino County, California. In some areas it is associated with Pinus ponderosa and P. jeffreyi forests, closed-cone coniferous woodlands, and pine-cedar-cypress pygmy forests. C. sragentii occurs sympatrically with C. macnabiana in Lake County, California, where it is larger and tends to occupy lower slopes than C. macnabiana.

Reproduction is exclusively from seed. Staminate cones are produced on trees that are 6 to 7 years old. Ovulate cones are produced on trees that are 5 to 6 years of age or older. The cones require two years to mature and contain about 100 seeds each. When cones are closed they persist on the tree until opened by the heat of a fire or from desiccation due to age. Seeds are shed gradually over several months after the cones are opened. Detached cones will open, but they rarely result in seedling establishment, usually due to lack of a suitable seedbed. Seed dispersal is primarily by wind and rain. Seeds require bare mineral soil for germination and establishment. Seedling mortality is high on shaded sites with abundant litter because of damping-off fungi as seedlings are sensitive to excessive moisture. Seedlings are shade intolerant and survive best in full sunlight. Most chaparral species are less able to compete on serpentine soils where C. sargentii is often found.

C. sragentii is a fire-adapted, fire-dependent species and it has slightly fire-resistant bark and serotinous cones, although its low branching habit makes it susceptible to crown fires. Reproduction is generally restricted to burned sites. The serotinous cones persist on the trees for years, often remaining closed for over 8 years. Cone opening is erratic, slow, and almost negligible except when cones are exposed to extreme heat; then it is rapid and uniform. When opened by the heat of a fire, the seeds fall on exposed mineral soil, with most seeds falling in the first few months. Fires that occur in late summer and fall and are followed by winter rains ensure seed dissemination on bare mineral substrates and moist conditions for germination. In southern California this species generally reach cone-bearing age before another fire occurs; severe fires can kill it. Thickets are conducive to crown fires, which usually kill most trees in the burned area, although fire may be patchy. Some large trees could survive surface fires; however, most large trees in burned areas are located on bare or rocky sites that may have been left unburned. Cones open as the resin melts and boils. Rapid charring of the thick cone scales extinguishes the flames, leaving seeds unburned. C. sragentii commonly forms thickets of dwarfed trees following chaparral fires.

Cypress (Cupressus spp.) wood is generally durable and stable. It is suitable for a wide range of exterior uses including joinery, shingles, and boats. Possible interior uses include moulding and panelling. This wood is not in high demand and therefore logging is not seen as a threat. Farmers may have used it for fence posts in the past. Although Sargent Cypress is grazed by cattle and deer, it is considered undesirable forage. Cupressus sargentii is in cultivation in Hawaii.

Although extending over a long distance and still abundant, the area of occupancy (AOO) is calculated with a grid of 4×4 km to fall within the threshold for Vulnerable. A continuing decline is inferred from the fact that fires will be either suppressed or too intense to benefit this species.

C sargentii is largely restricted to serpentine soils. Using cypress wood to fuel the furnaces used to extract mercury from serpentine soils has reduced California's cypress forests. Although young plants are not seen as desirable grazing for cattle, trampling by livestock can be detrimental to seedlings. Fire soon after trampling may eradicate an entire cypress grove. Sargent Cypress commonly forms thickets of dwarfed trees following chaparral fires. Fires occurring too frequently in the groves of C. sargentii and may destroy them, as reproduction could be eliminated before it had a chance to produce cones. Conversely, fire suppression could threaten the species too. Seedlings are susceptible to damping-off fungi. It is moderately susceptible to Coryneum Canker (Coryneum cardinale), which can kill trees. Mistletoe (Phoradendron pauciflorum) often forms dense clusters on bushy trees in Marin County.

Substantial proportions of the major areas of occupancy are on public lands where the natural vegetation is more or less protected under legislation. Management of fire, such that it allows fires to occur with frequencies and intensities approaching natural conditions, is crucial to the conservation of this species.