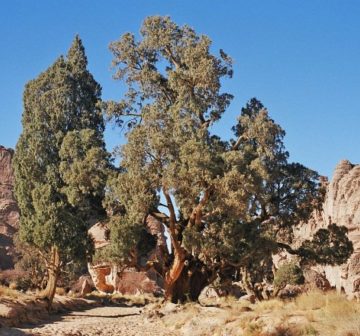 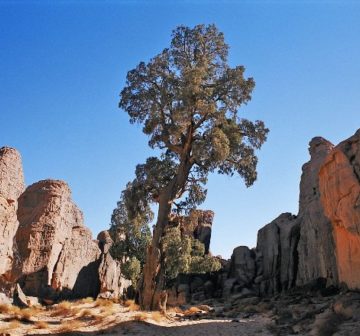 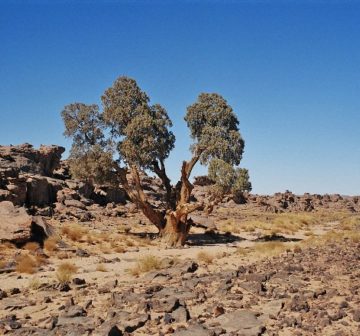 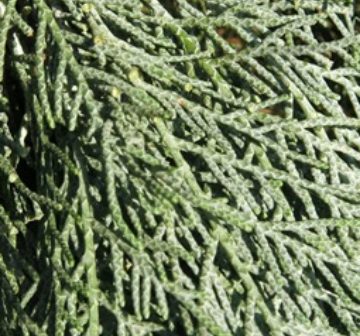 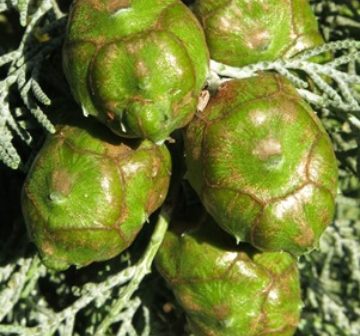 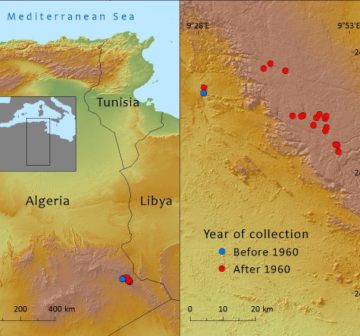 Endemic to Algeria where it occurs to the south-west edge of the Tassili Plateau within the geographical Regions of Maddak, Tassili-Hedjirit and Amiok. Here it has an altitudinal range of between 1430 and 1830 m with an extent of occurrence (EOO) of 1000km² (Abdoun & Beddiaf, 2002). Its range occupies a strip of 120km in length and between 6 and 15km wide and contains 46 sites. The area of ocupancy has not been calculated but is likely to be much less than 500km² given the small total population size and restricted habitat.

Up until the 1940s it was thought that there were no more than ten living individuals, however by 1949 the population estimate increased to 200 (Abdoun & Beddiaf , 2002), although for a long time the original number of 10 was still widely believed and quoted. Between 1971 and 1972 Säid Grim counted 230 living trees and numbered each one – these numbers still remain on the trees today. An inventory between 1997 and 2001 conducted by Abdoun and Beddiaf discovered that 20 of the 230 trees had died but they added 23 new individuals making a total of 253 individuals. The current population size is therefore 233 living trees, in varying states of health. Tamghit (24°38’ N) and Ellidj (24°55’ N) the population exist as a few scattered individuals which survive by clinging to the mountainsides or hidden in the ravines, while, north and south of this zone trees occur in groups of four to fifteen together, mostly confined to the less accessible wadis (Abdoun & Beddiaf, 2002). The distance between trees varies from 1 metre to 10 kilometres and their density, from a standing tree to about thirty. The trees with a circumference of between 3 to 4 m are estimated to be between 1200 and 2300 years of age (Abdoun et al., 2005). The population decline is estimated to be 8% over a period of 30 years (Abdoun & Beddiaf, 2002).

The trees grow on the summits of mountains or in the bottoms of valleys and gorges, where precipitation is estimated to be 30mm per year (Dubief, 1963). Sixty-eight percent of the trees are located in Wadi beds, 22% in rock (palaeozoic sandstone) fissures and 8% on ridges. Due to the present mutilated condition of most trees, it is not possible to characterise exactly the most favourable conditions for the species. It is in the rocky areas with little apparent soil that we find the greatest number of cypresses with their typical pyramidal shape. Phytosociologically the cypress is merely regarded by some authors (Leredde, 1957, Benhouhouh et al., 2005) as a companion species as it appears to have no link with the current surrounding flora. A phytohistorical study, based on charcoal, showed that approximately during the mid-Holocene time, that in this region were found Pistacia atlantica with Olea europaea ssp laperrinei (Abdoun 2002, 2006a). The height of trees varies between 3 and 22m, their circumference between 0.32 and 12m. A good number of these trees have developed fastigiated or pyramidal crowns.

The potential for natural regeneration had been considered absent until the discovery of two new individuals with circumferences of 32 and 37cm (Abdoun & Beddiaf, 2005). In its juvenile stage this cypress shows remarkable growth vigour. Radial incremental measurements taken showed an increase from 0.38 to 2.23mm per year in trees with circumferences between 0.8 to 2.2m, and increments from 0.08 to 0.14mm per year in trees of medium height relative to the entire population (3 to 7m) of which ages are estimated to range from 600 to 2000 years (Abdoun, 2005).

The wood was highly valued for construction and carpentry in the past. The main use now is for fuel.

The total known population is less than 250 individuals (C1). An estimated continuing decline of at least 25% within the next 25 years (one generation) is very likely due to continuing pressures from collection of firewood, mutilation by travellers, grazing and a lack of regeneration.

In 1860 there were records of this species occurring 100km further north than it is today (almost at latitude 26° N. from the Touaregs of Ghat). By 1926, Captain Duprez recorded that its range had become restricted to the region to the south known as Edehi (Abdoun & Beddiaf, 2002). The disappearance during this period was due to the inhabitants using the timber for carpentry and construction; caravans were organised to extract and transport the wood (Abdoun & Beddiaf, 2002). Despite its adaptation to the extremely arid conditions of the Tassili Plateau, this species is under serious from climate change, fire and the collection of firewood. The trees contain high levels of resin, which has meant that the wood has been invaluable for construction and hence its historical use which has led to the decimation of the population. As a result of the great drought of the 1970s the nomads of Tassili have now settled and have been replaced by tourists (on average 1,000 each year). Yet another danger is, however, caused by young refugees (commonly known as ‘clandestins’) from countries who cross the Tassili Plateau from countries south of Algeria. On a daily-basis they burn its wood, sometimes charring the roots of trees, by lighting campfires too close to the trees. The tourists and the animals that are used to transport the tourists (horses and dromedaries) have also degraded the area due to excessive trampling. Grazing by the animals has again had a detrimental effect. Many trees have become mutilated as a result of the removal of fire wood as a source of heat (and fuel) for the tourist – the tourist season is during the winter when night time temperature can reach as low as -7°C. (Abdoun, 2002). Natural regeneration of 2 to 3 trees per century is obviously not sufficient to sustain the population under the current pressures.

The population is in Tassili N'Ajjer National Park, which has been designated a World Heritage Site. Despite this protection, the trees and their environment are still subject to degradation associated with tourism. Visiting tourists need to be made aware of the value of these extraordinary trees. There needs to be an increase in the number of National Park staff to protect the area. Organizations such as the National Institute of Forest Research have been harvesting seed, cultivating them in nurseries and establishing plantations. Recent research relating to regeneration and dendrology has improved our knowledge of its biology and should assist with its conservation. There needs to be preventative measures put in place to stop the degradation of the trees and their environment and there is a considerable amount of work to be done in order to raise public awareness of this species in order to help safeguard its future.