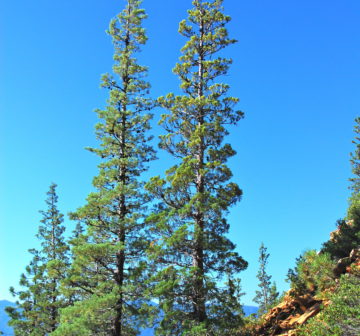 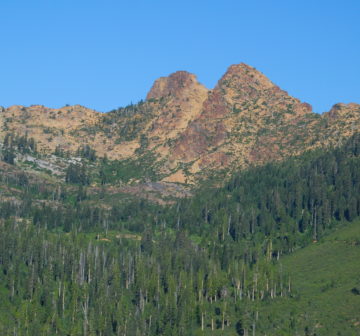 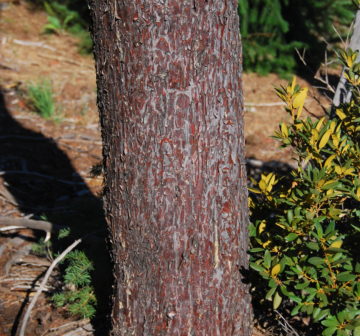 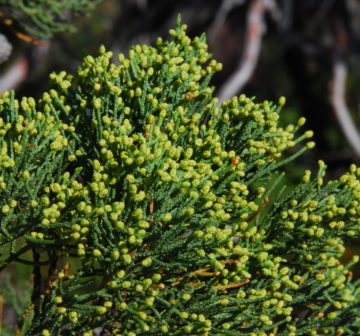 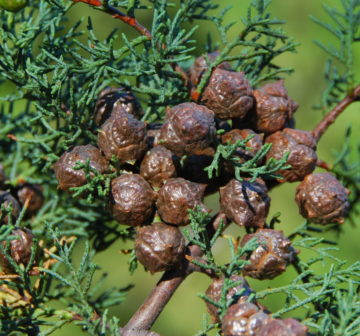 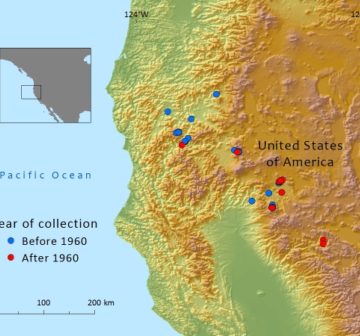 Northwest USA where it is known from northern California and the extreme south of Oregon. In northern California Cupressus bakeri occurs in Siskiyou, Modoc, Shasta, Plumas and Tehama Counties and in southwest Oregon it is very localized in Josephine and Jackson Counties. This includes localities in the Modoc Plateau, southern Cascade Range, Klamath Mountains, Siskiyou Mts. and northern Sierra Nevada. It is restricted to nine sites.

Fire suppression policies have reduced numbers of C. bakeri. A population on ‘the North fork of the South fork of Cow Creek’ (Sudworth, 1908) was described in a letter from J. C. La Plant to Sudworth in 1908 but this population now seems to be extinct. The largest existing subpopulation sprawls over 2.8 km² of basalt near Timbered Crater. Most subpopulations are much smaller and also scattered, some are quite disjunct.

Baker cypress is a component of the northern interior cypress forest. This habitat type is an open, fire-maintained, scrubby forest. It is associated with serpentine chaparral, and intergrades on less severe sites with upper Sonoran mixed chaparral, montane chaparral, or Pinus attenuata forest community types. On more mesic sites, the northern interior cypress forest intergrades with mixed evergreen forest or montane coniferous forest. Baker cypress rarely forms pure stands. The Timbered Crater grove is associated with Pinus ponderosa and P. jeffreyi forest and suggests a transition zone between several plant communities, including northern juniper woodland, yellow pine forest, and sagebrush scrub. High elevation groves in Plumas County, California, are associated with Abies magnifica forest. In the Siskiyou Mountains, it occurs on serpentine soils; in the Sierra Nevada and Cascade Range it occurs on basic volcanic rock. Baker cypress reproduces exclusively from seed. Cone production is abundant. Staminate cones are produced on trees that are 6 to 7 years old. Ovulate cones are produced on trees that are 14 years of age or older and require 2 years to mature. The cones are closed; they persist on the tree until opened by the heat of a fire or desiccation due to age. Seeds are shed gradually over several months after the cones are opened by heat. Detached cones will open, but they rarely result in seedling establishment, usually due to the lack of a suitable seedbed. Seed dispersal is primarily by wind and rain. Baker Cypress requires bare mineral soil for germination and seedling establishment. Seedlings have been found in areas that do not show signs of recent fire, but the seedlings are usually in the immediate vicinity of fallen cypress trees and along skid roads. Seedling mortality is greater in shaded situations with abundant litter because of damping-off. Seedlings are sensitive to excessive moisture. Baker cypress is restricted to well-drained soils. Soil profiles are almost absent. On gentle slopes trees can be found on deeper soil profiles. Pollen is shed in late fall, winter, and spring. Seeds mature 15 to 18 months after pollination. Ovulate cones ripen the second season after pollination, but remain closed until opened by heat or age. Baker cypress is a fire-adapted, fire-dependent species. Reproduction is usually restricted to burned sites. The serotinous cones persist on the trees for years. Cone-opening is erratic, slow, and almost negligible except when cones are exposed to extreme heat; then it is rapid and uniform. When opened by the heat of a fire, the seeds fall on exposed mineral soil, and produce thickets of seedlings. Most seed falls in the first few months following fire. Fires that occur in late summer and fall, followed by winter rains, ensure seed dissemination on bare mineral substrates. Baker cypress has thin, exfoliating bark which offers little fire protection. Most fires probably kill Baker cypress. Cones open as the resin melts and boils. Rapid charring of the thick cone scales extinguishes the flames, leaving seeds unburned.

No commercial uses are known of this species; like other cypresses trees they may have been felled for fence posts in the past. Although trees retain a conical crown which is attractive in gardens, it is little used in horticulture, presumably because it is not strikingly distinct from other Californian species.

This species is known from less than 10 locations, with the largest subpopulation covering less than 3km². Calculating the area of occupancy based on mapping herbarium collections and using the IUCN recommended 2×2 km grid size, and observing or inferring a continuous decline in numbers of mature trees, this species meets the criteria under B2 for Endangered.

Fires occurring too frequently in cypress groves may destroy them, as reproduction could be eliminated before it had a chance to produce cones. Conversely, fire suppression could threaten the species. Fire suppression policies of the past decades have severely limited reproduction of this fire dependent species. In the Mud Lake-Wheeler Peak area of Plumas County in California, Baker Cypress is being replaced Abies magnifica and A. concolor. Hundreds of saplings and pole-sized trees have died with no indication of insects or disease. Competition of crowns for light, shading of the ground, and accumulation of thick, black duff characteristic of dense true fir stands have created an unfavourable environment for the establishment and survival of Baker cypress. Most cypresses of California are very sensitive to lack of light, losing their foliage when growing in shade. Seedlings of Baker cypress are susceptible to damping-off fungi. It is occasionally attacked by Juniper Mistletoe (Phoradendron juniperinum ssp. juniperinum) in Plumas County, and Siskiyou cypress (C. bakeri ssp. matthewsii) has been infected by Coryneum Canker (Coryneum cardinale), which can kill trees.

Cupressus bakeri is present in several protected areas. Management of fire, such that it is allowed to occur at frequencies and intensities approaching the natural situation, is paramount to the conservation of this species. In the absence of fire more subpopulations will be outcompeted by other conifers.