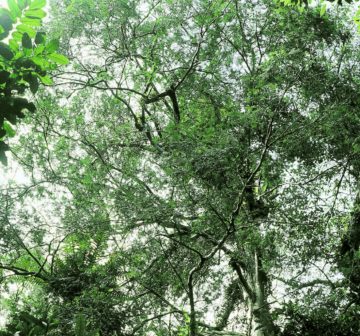 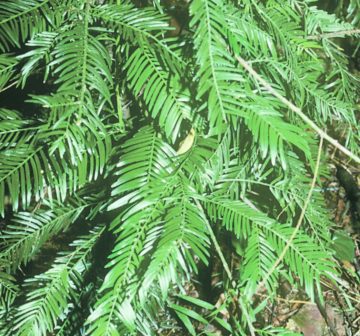 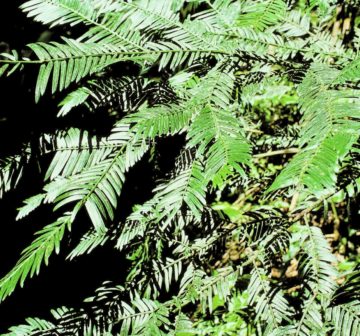 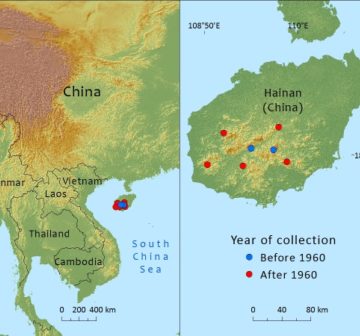 In the Flora of China 4: 87 (1999), this species is treated as a synonym of Cephalotaxus mannii. However, in a note the co-author Robert Mill considered the plants from Hainan to be separable as the species named and described by H.L. Li, i.e. C. hainanensis. Mill gives a statement on morphological differences between the two species. Under this narrower species circumscription it is possible that other specimens from southern China and northern Viet Nam would have to be included under C. hainanensis, with consequences for its distribution and hence conservation status. Ying et al. (2004) map this species as occurring in western Guangdong, Hainan, southeastern and western Guanxi, western Yunnan, and even southeastern Xizang [Tibet]. The populations of Yunnan and Tibet are here treated as belonging to C. mannii. A critical modern revision of the genus to resolve these issues is lacking at present. This assessment treats this taxon as being endemic to Hainan

Endemic to Hainan Island, China (Jianfeng Ling, Limu Ling, Wuzhi Shan, Bawang Ling, Diao Luo Shan). The area of occupancy is estimated to be as small as 10km² and it is known from five localities. The population is estimated to number 126,000 individuals on Hainan. It is uncertain how many of these are mature.

Cephalotaxus hainanensis occurs in mixed warm temperate to subtropical rainforests (evergreen broad-leaved forest), mainly in the mountainous areas on the island of Hainan, where it attains tree habit and size (10–20m). Occurs from sea level up to about 1700 metres above sea-level. It can sometimes be the dominant tree in the community.

The bark and leaves contain valuable medicinal compounds such as cephalotaxine and harringtonine. Trees would also have been logged in the past for their timber.

Cephalotaxus hainanensis has a small area of occupancy that is certainly less than 500km² and may be as small as 100km². It is known from four to five locations and there is continuing decline in the extent and quality of the habitat due to the expansion of tourist developments on the island. The species was also harvested in the past for its timber and bark was also stripped which may have resulted in tree mortality, but it is not known to what degree those threats impacted the population (although it was listed as Endangered under criterion A2d previously). For this assessment it is listed as Endangered under criterion B2.
Global threats

Past population declines have been due to logging and more recently exploitation of bark and leaves which contain the valuable medicinal extracts, cephalotaxine and harringtonine. The main threat now is habitat destruction due to the expansion of tourist developments (ongoing). As with other members of the genus, the maturation rate of the seed is slow and regeneration is relatively infrequent.

Occurs in protected areas on Hainan (e.g. the Wuzhi Shan, Bawang Ling, and Diao Luo Shan nature reserves). The Chinese Government has imposed a ban on all logging, hence the logging and removal of bark of this species should no longer be significant threats.