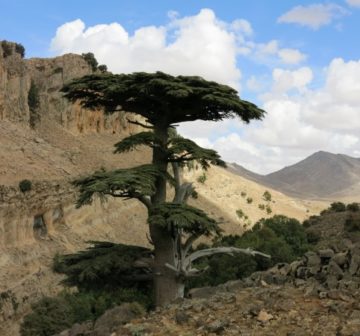 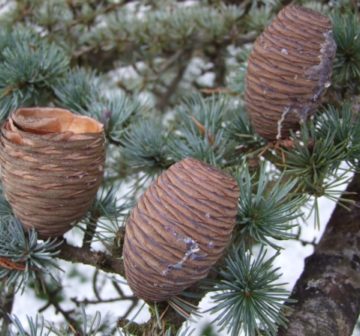 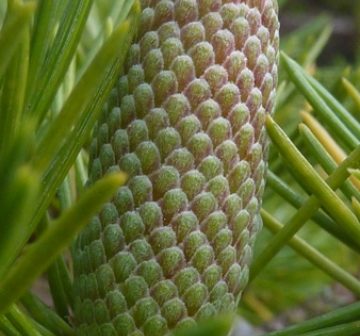 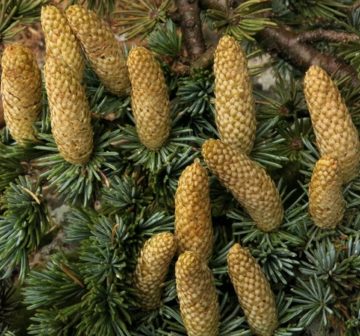 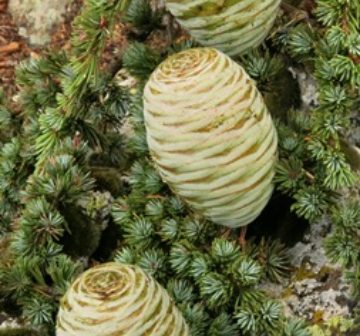 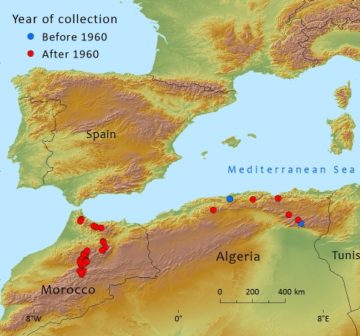 Atlas cedar forests are distributed in Morocco (Rif Mountains, Middle Atlas, and north-eastern High Atlas) and Algeria (Aurès, Belezma, Hodna, Djbel Babor, Djurdjura, Blida and Ouarsenis). The Middle Atlas (northern Morocco) contains about 80% of the Atlas cedar forest surface area (ca. 100,000 ha). The total area of occupancy in Algeria and Morocco is estimated to be between 1300 and 1500  (Terrab et al. 2008, Linares et al. 2011). The extent of occurrence is more than 20000km² with seven locations.

Recent genetic analysis have indicated that two major subpopulations exist: one in the Rif and Middle Atlas mountains in Morocco and the other through the Algerian Tell Atlas and Aurès mountains (Terab et al. 2008). Stands within these subpopulations tend to be relatively localised and fragmented.

Atlas cedar occurs at elevations of 1300 to 2600 metres above sealevel, where the amount of annual rainfall ranges from 500 to 200 mm and the minimum temperature of the coldest month ranges between −1 and −8 °C. The Middle Atlas (northern Morocco) contains about 80% of the Atlas cedar forest surface area (ca. 100,000 ha). Middle Atlas cedar forests contain several evergreen tree species which include Quercus rotundifolia, Juniperus oxycedrus and Ilex aquifolium. The deciduous tree include Acer opalus and Crataegus laciniata. Taxus baccata also occurs in the Algerian forests (Bentouati, 2008).

Heavily exploited over several centuries for its strong durable timber. Essential oils are also distilled from the timber and foliage. It is widely cultivated in Europe.

Cedrus atlantica has an estimated extent of occurrence greater than 20000 km². Its total actual area of occupancy (AOO) is estimated to be between 1300 and 1500km² (Terrab et al. 2008, Linares et al. 2011) and there are seven main locations. Range wide declines of up to 75% in area of occupancy are estimated to have occurred between 1940 and 1982. Recent droughts have led to further declines in many parts of its range and it is likely that such declines will continue if the regional climate continues to become more arid. In addition debilitation of the population has occurred as a result of pests and diseases. Without proper control measures in place these the negative effect are likely to continue. The decline over the last 50 years is sufficient to warrant an assessment of Endangered under the criteria for A2.

Atlas cedar forests have been exploited for their timber for several centuries. In addition they have been subject to overgrazing and repeated burning. Exploitation has increased over the last 50 years: range wide declines of up to 75% are estimated to have occurred between 1940 and 1982 (Benabid & Fennane, 1994 cited in Terab et al. 2008). Since the 1980s a series of droughts have led to further decline, especially in areas closest to the Saharan desert (Bentouati, 2008; Linares et al. 2011). Crown defoliation by processionary caterpillars (Thaumetopoea bonjeani and T. pityocampa), cedar bark stripping by Barbary Macaques (Macaca sylvanus), and damage by cedar bark beetles (Phaenops marmottani) seem to have exacerbated the recent decline (Allen et al. 2010).  Recent dendroclimatological studies (Touchan et al. 2011) have indicated that the current series of droughts are at least as intense as any that have occurred in the last thousand years. Projections for future climate change indicate a continued decrease in precipitation (Touchan et al. 2011)

Many stands are located within National Parks and receive some protection from overgrazing and logging. Programmes to monitor the extent and severity of recent die-back are in place.