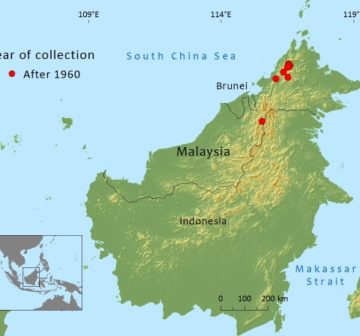 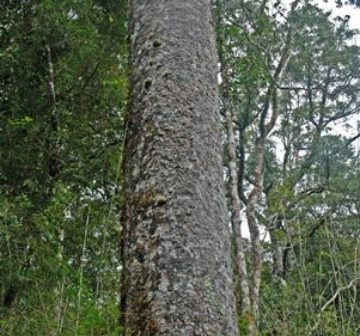 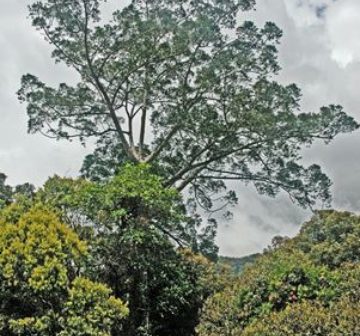 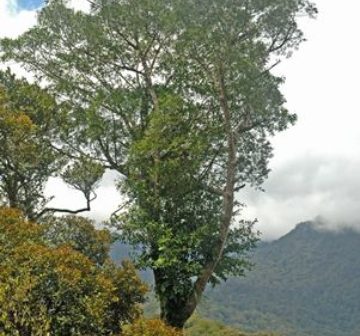 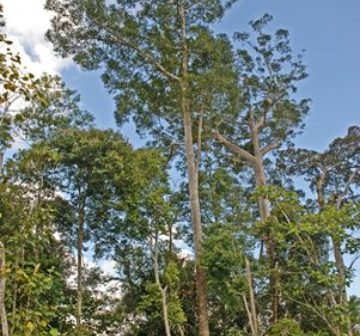 Recorded from Sabah (Crocker Range to Mt. Kinabalu) and Sarawak (Gunung Murud) in Malaysia. The majority of localities for this species are in Sabah in the Crocker Range and Mt Kinabalu. Recently, it has been recorded from Gunung Murud in Pulung Tau National Park, northern Sawarak (Pearce, 2006). It is likely that it occurs in the intervening areas and possibly in adjoining parts of Kalimantan (Indonesia).

No quantitative information about the population is currently available and this would be difficult to obtain because the species is difficult to identify with certainty (pollen cones are needed to confirm identification). The population trend is undoubtedly going downward due to unsustainable logging.

An emergent tree in lower montane evergreen tropical rainforest (1050 to 1700m). It occurs in Dipterocarp rainforest and forest dominated by Fagaceae.

This species is not distinguished from A. borneensis by foresters and will be logged as that species or 'dammar' or 'kauri' timber. Its uses are similar.

Despite the protection provided in three national parks, decline is ongoing due to logging elsewhere and the extent of occurrence (EOO=15,732 km²) and area of occupancy (AOO=640 km²)  fall below the thresholds for Vulnerable. In calculating the AOO an allowance was made for the limited number of localities known from herbarium collections outside the three national parks. If these subpopulations would turn out to be as small as the ones known in the parks, the AOO could well be smaller than estimated here. The previous IUCN assessment using criteria version 2.1 (1994) was Vulnerable based on the limited number of locations. No new locations have come to our knowledge since, but this may be due to under sampling. Using the B criterion for the listing is therefore more reliable, as there is no doubt about the continuing decline.

Logging is the most serious threat to the survival of this species. It has a limited range but in part of its range it is sympatric with A. borneensis. Foresters and loggers do not distinguish between the two as both produce the same large boles of high quality Kauri timber.

This species is present in the Crocker Range National Park, which has some areas with undisturbed primary forest left. It is not known what proportion of the population is within this protected area. It is also present at lower elevation in Mount Kinabalu National Park. This is a small proportion of the population, at least when estimated on the basis of the extent of occurrence for the species. It has recently been recorded from Pulong Tau National Park in Sarawak.