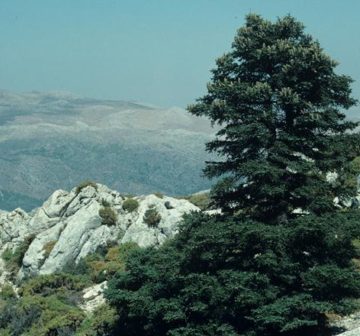 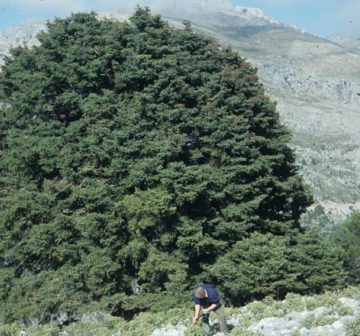 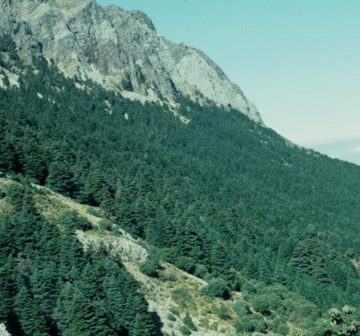 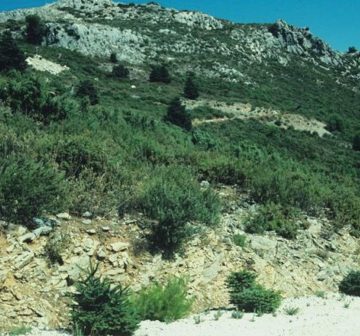 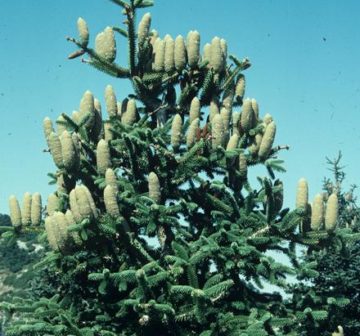 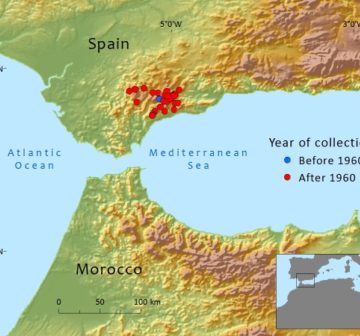 Leaves spirally arranged all around shoot radially and perpendicularly from the shoot, those below bent backwards; 1–1.8cm, leathery, stiff, bluntly rounded (fully exposed); dull grey-green or blue-grey with two broad stomatal bands of grey-green or dull bluish white on each surface.

This is one of two varieties, the other being A. pinsapo var marocana (treated on a seperate page), which is native to north Morocco.  The differencies between these two varieties is slight; in var. marocana the leaves are arranged around the shoot pectinately and not radially and perpendicularly from the shoot as in var. pinsapo. The female cones in the var. marocana are much larger, 10–18 x 3.5–5cm.

In the Sierra de Grazalema the main distribution is along the Sierra del Pinar where it is restricted to an area of occupancy of 4km²; the three small localities in this area contain trees which have not yet reached reproductive age. In the Sierra de las Nieves location most trees are concentrated in the municipalities of Yunquera, Ronda and Tolox, where they occur in an area of  24km². The smallest and most isolated subpopulation is at Los Reales, within the Sierra Bermeja, where it is restricted to a small area of 0.7km². There are currently no accurate figures for the total number of mature individuals over the full extent of its range.

It grows mainly on northerly exposures of the Sub-Betic mountains. The trees in Sierra de Grazalema and Sierra de las Nieves occur on dolomitic soils and have an altitudinal range of 900 to 1,600 m.  Above 1,100m they form dense, pure forests, but below this altitude they form mixed communities in dense forest with Quercus rotundifolia and Q. faginea and with a shrub layer mainly of Daphne laureola ssp. latifolia, Hedera helix, Helleborus foetidus, Ruscus aculeatus and the herbs Iris foetidissima and Rubia peregrina. In the more open forest areas the fir is associated with Crataegus monogyna ssp. brevispina, Prunus spinosa, Ptilotrichum spinosum, Bupleurum spinosum, B. gibraltaricum and Cistus albidus. The forest in Sierra Bermeja is on serpentine soils and here the tree layer occurs with Quercus suber and with other conifers such as Pinus pinaster and P. halepensis (this association is also occasionally found on calcareous soils). The shrub layer on serpentine soils is composed of Erica terminalis, Genista lanuginosa, G. triacanthos, Cistus populifolius ssp. major, Bunium alpinum ssp. macuca and Cerastium gibraltaricum. Abies pinsapo has a reproductive cycle of one year; the differentiation of reproductive buds occurs in July and pollen shed and female cone receptivity occurs in April to May. Wind-borne pollen dispersal has a low capacity. Fertilization occurs two months after pollination and female cones achieve their full development by June. Seeds begin to shed in October and they enter dormancy until February when germination occurs; seeds that fail to germinate in this year die, hence there is no persistent seed bank formed.

The timber has historically been locally used for house construction. The forests in the Sierra del Pinar were managed for timber production but there is no present-day use of the timber.

Fire is the main threat to this taxon and during the last 45 years, 566 hectares of forests has been lost. Abies pinsapo is not fire-adapted; it does not have the ability to regenerate from sprouting and there is a lack of seed longevity, hence there is no soil seed bank available for potential post fire regeneration. Other threats include pests and diseases which have increased in their occurrence over the last 15 years, especially in drought years and in forests resulting from reforestation. The main pathogens are the fungi Armillaria mellea and Heterobasidium annosum, and the insect species Dioryctria aulloi and Cryphalus numidicus. The latter is the most detrimental insect as it attacks the trunk and branches causing death. The isolation of populations due to fragmentation and a low genetic flow is currently an important risk that could give rise to a low genetic diversity within populations which would make them more susceptible to diseases. Threats from livestock are no longer a problem. During the last decade (1990s) a regional warming trend and a the decrease in precipitation has been observed. These changes in climate together with changes in landuse appear to be the causes of mortality of trees at elevations below 1100m (Linares, 2009). The extent of occurrence has been calculated as being 940km² and the area of occupancy has been calculated as being 28.7km²; when a standard 4km² grid is used, the area of occupancy is between 10km² and 500km². The number of locations is limited to three.

Abies pinsapo var. pinsapo is protected at a regional level under the Spanish law in the “Andalusian Catalogue of Threatened Wild Plants“ (Decree 104/94) which means that it has to have a plan of conservation which is currently being developed. At the European level, the forests have been included in the Habitats Directive (92/43/CEE).

In situ conservation action: i) most of the forests are included in the so-called “Network of Protected Areas in Andalusia”: Sierra de Grazalema Natural Park (1984), Sierra de las Nieves Natural Park (1989) and Los Reales de Sierra Bermeja Nature Area (1989). ii) In the last seven years the “Action Program for A. pinsapo conservation” has been established. Under this program conservation actions are being carried out which include the prevention of forest fires, phytosanitary treatments, fencing small trees to protect them from livestock, and experimental reforestations.

Lastly, research studies are being undertaken to better understand the genetic variability of the remaining forests, the level and frequency of gene flow between them and to assess the possible problems derived from climate change.