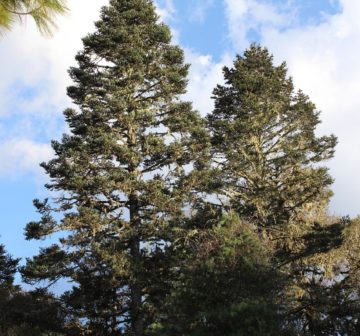 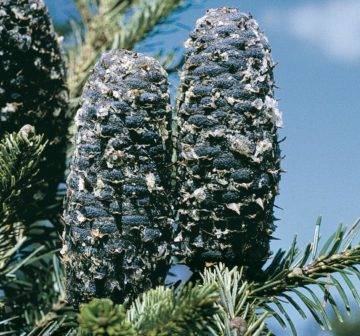 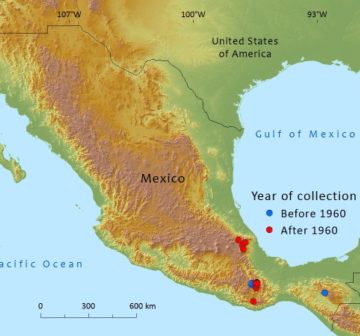 Native to Mexico in the States of: Chiapas, Guerrero, Oaxaca, Puebla and Veracruz.

Population is decreasing and is severely fragmented.

Both varieties of this species occur in high mountains of sub-tropical S Mexico, at elevations between 2500 to 3000 metres above sea-level. The soils are of volcanic origin. The climate is cool, moist oceanic, with rain mostly in the winter. There are some pure stands at the highest elevations, but this species is usually mixed with highland pines, e.g. Pinus montezumae, P. pseudostrobus, and P. ayacahuite, and also with Cupressus lusitanica and Quercus spp. Shrubs are e.g. Vaccinium spp., Andromeda spp., Ribes spp. and Fuchsia spp.

This species is rare and its two varieties occur in more or less disjunct, limited stands. Exploitation for timber is minor and its use is local, mainly worked in sawmills for domestic purposes. In cultivation it is extremely rare and limited to some dendrological collections in countries with mild climate, e.g. southern France.

The assessment of the species as a whole follows that of the two varieties: while the EOO increases with all mapped locations included, the calculated AOO is still well under 500 km² and there is likely to be continuous decline, especially in quality of habitat and number of mature individuals.

Logging may have some impact on this species, but data to evaluate this quantitatively are lacking. For the 1998 CSG assessment it was assumed that a 20% decline had occurred over the duration of 3 generations (about a century). Deforestation in the region is an ongoing process, which affects Abies as a late successional tree more than e.g. Pinus, so it is considered that the decline is continuing.

More forest reserves with effective management and policing would be required to protect this species from decline.