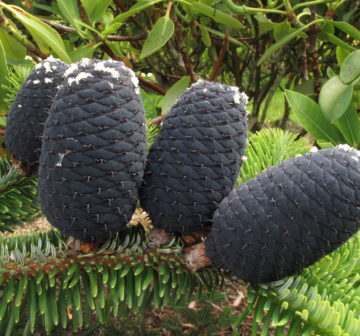 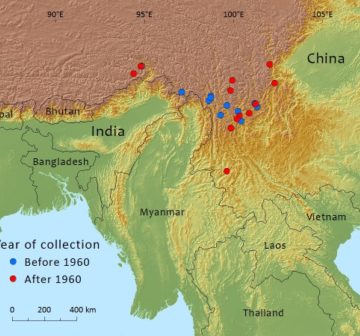 The typical form of A. forrestii is mainly found around the the Lijiang area (Yulongxue shan) and across the border into the Muli district of Sichuan (China). It also occurs in Xizang and possibly northern Myanmar

The species (and its varieties) occurs in the high mountains of SW China at elevations between 2,400 m and 4,300 m a.s.l. (commonly 3,000-4,000 m), on grey-brown mountain podzols. The climate is cold and wet, annual precipitation ranges from 1,000 mm to 2,000 mm. The species forms forests in pure stands near the tree limit, or is mixed with Picea likiangensis, Larix potaninii, Tsuga dumosa and some broad-leaved trees, e.g. Betula albo-sinensis, Acer spp. and Sorbus spp. at lower elevations. An ericaceous lower shrub layer with Rhododendron spp. is often prominent.

Forrest's Fir and its several varieties occur at high altitudes, often up to the tree line and consequently only yield timber suitable for saw mill processing from larger trees at its lowest altitudinal range. Exploitation has (at least officially) ceased with Chinese forest conservation law now prohibiting logging in old growth forest in the western provinces. Having been collected on numerous occasions by the famous European plant hunters of the early twentieth century it was introduced to Europe and the United States where it is still quite common in arboreta and private large gardens. Most trees labelled A. delavayi actually belong to this species (A. delavayi has narrow leaves with revolute margins and dark violet-blue or purplish black seed cones).

Abies forrestii var. forrestii is assessed as Near Threatened (NT) as it occurs at lower elevations in the Lijiang and Muli districts where there has been significant deforestation. While the information available is not sufficient to assign a Vulnerable status under criterion A2cd, the use of NT is considered appropriate as highlighting a possible situation which may need to be addressed in a future re-assessment.

Logging has been the principal threat. Exploitation has (at least officially) ceased with Chinese forest conservation law now prohibiting logging in old growth forest in the western provinces.

The Government of China has recently imposed a logging ban in western China. This variety is present in a number of protected areas.