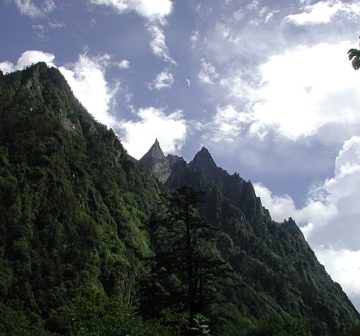 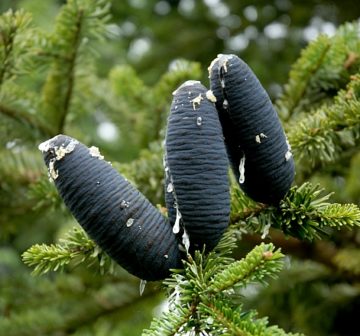 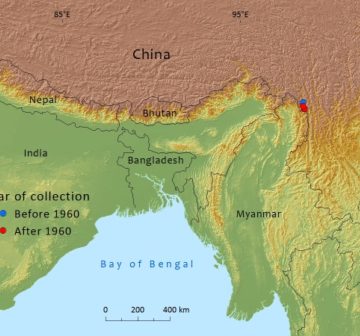 This variety is distinguished from the typical forn by its longer (but variable: 1.2-4.3 cm) and broader (1.5-2.8 mm) leaves, which are less revolute. The shoot is purplish-brown and glabrous. The cone is purplish-blue and has the same apically thickened, obtriangular-flabellate seed scales, but included bract scales with a short cusp, which may be barely visible in the lower part of the mature cone (Farjon 1990)

Recorded from the Nukiang River area in the northwestern Yunnan province, and Yongde shan, Wu Mu Long township, China. In Myanmar, it is known from Kachin state, Tama Bum

Occurs on high montane settings (2950-3300 m) and isolated peaks (such as Tama Bum in Myanmar) where it is the dominant species, occurring with Sorbus species, Acer, Rhododendron and similar woody temperate trees/shrubs including bamboo.

Timber used locally. In Myanmar, an infusion of the leaves is used as a cure fore headaches

The extent of occurrence is estimated to be about 20,000 km² and although there are more than 10 locations known, the subpopulations are severely fragmented. There has been an estimated decline of between 20 and 50% over the last three generations. It is uncertain if there is a continuing decline in the main part of its range in China as logging has been banned in most mountainous areas. The situation in Myanmar is unclear but continuing decline due to ongoing logging is suspected. Due to the uncertainties of the extent of the past decline, and the situation in Myanmar it is assessed as Near Threatened.

Logging is the most serious threat.