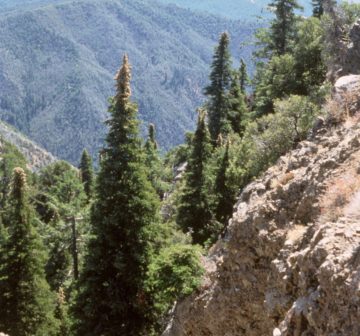 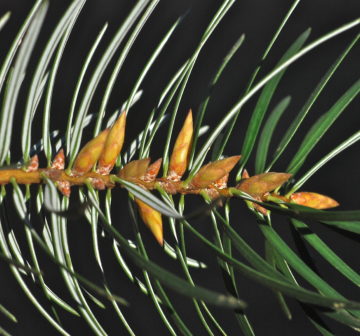 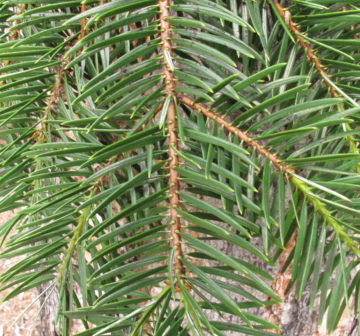 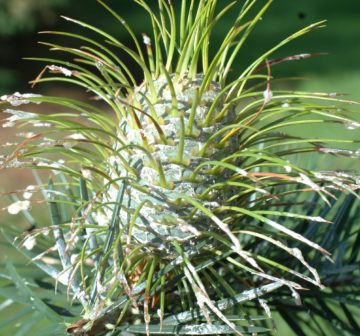 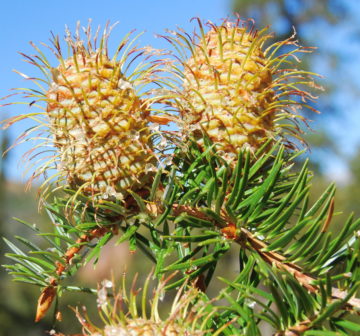 Bristlecone Fir is restricted to five main locations in the Santa Lucia Mountains of the central California coast in Monterey County and northwestern San Luis Obispo County at altitudes ranging from 213 m to 1,571 m. Its estimated extent of occupancy is about 710 km2. Its actual area of occupancy is estimated to be less than 20 km2 (Thorne et al.2002). The majority of stands are in the northern part of its range.

Using standard IUCN techniques, herbarium specimen based estimates of its extent of occurrence and area of occupancy give figures of 1485 km2 and 64 km2 respectively. All estimates are within the threshold for endangered. The number of locations varies from 6-20, depending on the threat used to define them. Subpopulations are regarded as severely fragmented as it generally occurs as small stands or scattered individuals in areas that are not prone to fire.

Throughout its range A. bracteata is restricted to steep north- and east-facing upland slopes and ridges, in canyon bottoms, and on raised stream benches and terraces.These areas are not prone to hot fires. It occurs either in mixed evergreen forests, canyon live oak communities or occassionally with Sequoia sempervirens, Pinus lambertiana and P. ponderosa

Abies bracteata has been assessed as Near Threatened on the basis of its restricted distribution, a decline in the quality of the habitat in areas surrounding existing stands due to the effects of Sudden Oak Death, poor regeneration and poor re-establishment potential. It is also potentially susceptible to indirect effects of climate change. Any further change in its status could lead to a listing as Endangered, under criterion B.

A. bracteata is not currently threatened by any form of utilization and almost all subpopulations are within protected areas so that changes in land-use are unlikely to occur in the near future. Under normal conditions, fire is a relatively minor risk as most stands are confined to areas that rarely burn. However, dieback of associated oak species through Sudden Oak Death may increase fuel-load in surrounding areas and heighten the risk of more intense fires (Chen et al. 2017). Additionally, climate change impacts such as variations in precipitation, associated changes in fire frequencies and intensities would be problematic (Loarie et al. 2008; Potter et al. 2017). A. bracteata's ability to respond and adapt to changes in its environment is hampered by poor seed set associated with inbreeding and seed predation, infrequent regeneration and a lack of genetic diversity within and between subpopulations (Ledig et al. 2006).

Sanata Lucia Fir is nationally ranked as "G2 - Imperiled" (NatureServe 2017) but as 1B.3 "Not very endangered in California" by the California Native Plant Society (CNPS 2017). It is not listed under the federal Endangered Species Act.

The majority of localities are within the Ventana Wilderness area of Los Padres National Forest protected areas.